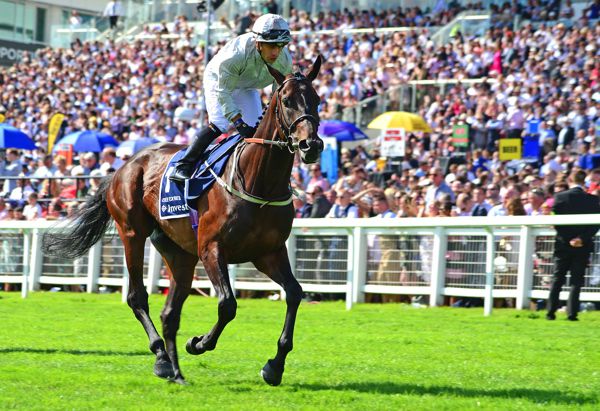 Connections of Dee Ex Bee have indicated they could employ a different set of tactics if they cross swords again with Stradivarius in the Qatar Goodwood Cup.

The four-year-old tried to make every yard over the two and a half miles of the Ascot Gold Cup, battling on into second but proving no match for John Gosden’s defending champion.

While defeat at Ascot ended any chance of Dee Ex Bee landed the 1 million pound stayers’ bonus sponsored by Weatherbys Hamilton, the Mark Johnston-trained colt looks set to roll on to Goodwood next month — although his team are under no illusions about the challenge presented by the all-conquering Stradivarius.

Charlie Johnston, assistant to his father, said: “Dee Ex Bee has come out of the Gold Cup well and, although we are no longer in the running for the WH Stayers’ Million, the Qatar Goodwood Cup looks a fairly obvious next target.

“We were very pleased with the horse last week — I don’t think there was any reason not to be.

“It was a great run in defeat and again he showed what a fantastic attitude he has, coming from looking like he would finish third or fourth at the furlong marker to getting back up for second in the final stride.

“The winner is a true champion who has shown now over the last 18 months that regardless of what conditions are thrown at him, he finds a way to win. And on that particular day, Frankie (Dettori) at one stage seemed almost invincible.

“Going forward, we are thinking that it is probably not ideal for our horse to make his own running. Having something to aim at might help him, as he enjoys a battle.

“We came off second-best and are under no illusions that the winner will start favourite again, but we are looking forward to having another crack at him.”

Stradivarius is the obvious headline act among 30 entries for the Goodwood Cup and if he can land a third success, he will match Double Trigger (1995,’97 and ’98) as the only triple winner of the race.

Last year’s Melbourne Cup hero Cross Counter finished fourth at Ascot and could try his luck again for Charlie Appleby, while fifth-placed Flag Of Honour is one of nine entries for Aidan O’Brien.

Three-year-olds South Pacific and Constantinople, first and second in the 12-furlong King George V Handicap at Royal Ascot, are notable contenders for the master of Ballydoyle.

St Leger contender Dashing Willoughby is one of two possibles for Andrew Balding, along with Cleonte, with both having struck gold at Ascot, while Sylvester Kirk’s Salouen could take a step up in trip for the first time.