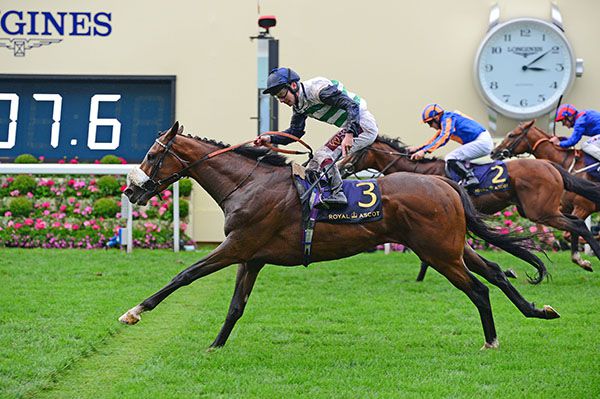 Andrew Balding is tempted to test the staying powers of Dashing Willoughby by stepping him up in trip and class in the Qatar Goodwood Cup.

The Kingsclere trainer favours running the three-year-old over two miles for the first time in the Group One contest on July 30, rather than the Princess of Wales’s Stakes at Newmarket on Wednesday week.

After filling the frame on his opening two starts this season, the son of Nathaniel scored for the first time since his winning Wolverhampton debut when he took the Queen’s Vase at Royal Ascot.

Balding said: “Dashing Willoughby has got an entry in the Goodwood Cup and one in the Princess of Wales’s.

“I’m sure he would stay two miles, and the three-year-olds get a healthy weight-for-age allowance, which makes the Goodwood Cup quite attractive.

“You are taking on the best stayers — but given the prize money, I would think that is the most likely option.

“He certainly handles ground with ease in it well, but I would think over two miles quicker ground wouldn’t be a problem.”

Stablemate Beat The Bank will try to go one better than in the Queen Anne Stakes at the Royal meeting when returning to the Berkshire track to defend his crown in the Group Two Fred Cowley MBE Memorial Summer Mile.

Balding said: “Beat The Bank will probably go back for the Summer Mile, then on to the Sussex Stakes. He seems in good form.

“He won the Summer Mile last year — so he will have to carry a penalty — but as long as he is in good form, that is where we will go.

“He has run well in the Sussex Stakes before, so it seems silly not to go back there afterwards. There are lots of options over a mile and a quarter for him after that.”