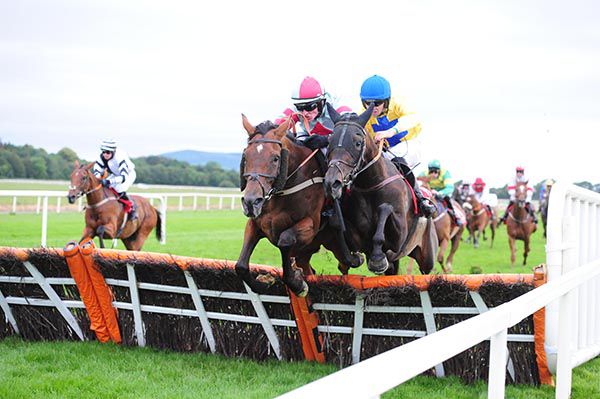 Rock On Bennie (nearside, Conor Orr) is bumped by My Peggy (Danny Mullins) at the last
© Photo Healy Racing

Rock On Bennie sprung a 50/1 surprise (clipped in from 66s) in the Finbarr Quaid Electrical Mares Handicap Hurdle at Cork.

On her handicap debut Conor Orr was aboard for trainer Ray Hackett, and owners the Little Big Rock Syndicate.

The successful daughter of Beneficial was held up towards the rear, and she made progress before the straight.

Sixth three out, Rock On Bennie was ridden into third two out and was soon switched left.

The five-year-old disputed and was bumped by eventual second My Peggy at the last.

Soon in front the outsider kept on well on the run-in to score by two and a quarter lengths.

The Irish Horseracing Regulatory Board Veterinary Officer reported to the Stewards that Famous Day trained by Oliver McKiernan was noted to have blood on the nose as a result of exercise induced pulmonary haemorrhage.

D.J. O'Keeffe, rider of Lucia's Bob trained by John J. Walsh, reported to the Clerk of Scales that his mount finished lame.

K.C. Sexton, rider of Dunloe Lady trained by Peter Fahey, reported to the Clerk of Scales that his mount hung throughout.

R.P. Treacy, rider of Quarry Lil trained by Paul O'Flynn, reported to the Clerk of Scales that his mount was badly hampered by a faller.

The Stewards requested a report from Ray Hackett, trainer, as to the apparent improvement in form of Rock On Bennie, placed first, as compared with its recent form.

Liam Hackett, Authorised representative for Ray Hackett, reported that their charge reappeared after a layoff when running at Limerick on the 31st March but the filly got a fright at the first hurdle and this appeared to have affected her confidence and she never got into contention.

On her most recent run at Tipperary on the 23rd May she was ridden up with the pace but ran too free.

Today the filly was held up which allowed her to finish her race on underfoot conditions that also were to her liking.

In his opinion the filly was not the most genuine but everything appeared to happen in her favour today.

Having considered the evidence the Stewards noted the content of the report.