Rose Of Kildare keeps Harrington pair and the rest at bay 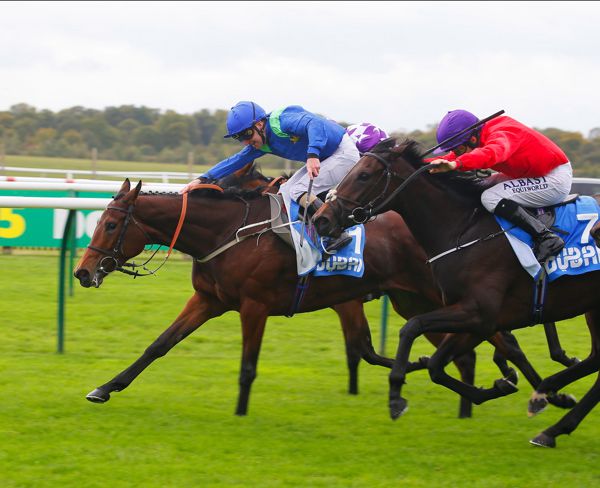 Rose Of Kildare showed no signs of a long season catching up with her when showing a warrior-like attitude to take the Godolphin Lifetime Care Oh So Sharp Stakes at Newmarket.

Running for the 12th time this year, the Mark Johnston-trained daughter of Make Believe successfully defied a 3lb penalty for a Group Three victory at Ayr to strike at the same level on her return to seven furlongs.

Hitting the front inside the final furlong, the 12-1 winner stayed on in tenacious fashion to hold off the previously-unbeaten Valeria Messalina by a neck.

Johnston said: “It’s the age old story and we have been here before with the likes of Masham Star. Is it the fact they are tough because they have run 12 times, or the fact that running 12 times has made her tough?

“There is nothing that keeps them sound and tough like regular racing. I have to admit if she wasn’t 3,000 euro filly she would not have run so much earlier on.

“She just came there on the bridle two out and the further she went, the better she got. We will look at the English Guineas and something like the German Guineas as a fall-back.”

Paddy Power and Betfair introduced the winner at 50-1 for the Qipco 1000 Guineas.

Good Vibes made the most of a drop in trip to get her career back on track with victory in the Newmarket Academy Godolphin Beacon Project Cornwallis Stakes.

The daughter of Due Diligence appeared to appreciate the return to five furlongs, gaining her first success since claiming a Listed contest at York in May with victory in the Group Three event.

Bursting through late on under Richard Kingscote, the David Evans-trained 12-1 shot found plenty when asked for her maximum effort to hold Pistoletto at bay by a neck.

Jason Maguire, racing manager to owners Paul and Clare Rooney, said: “We were a little bit worried about the ground, as it was soft here earlier in the week, then good to soft. She handled it well, but she gets that trip well.

“Dave Evans has done a brilliant job with her, he has always held her in the highest regard and brought her here for her first run. Paul and Clare love their racing and it is good they have a good mare.”

He added: “Coming here was probably going to be her last run of the season, but we will have a chat with Dave and see what he thinks.”