Samcro entered for beginners chase at Down Royal on Friday 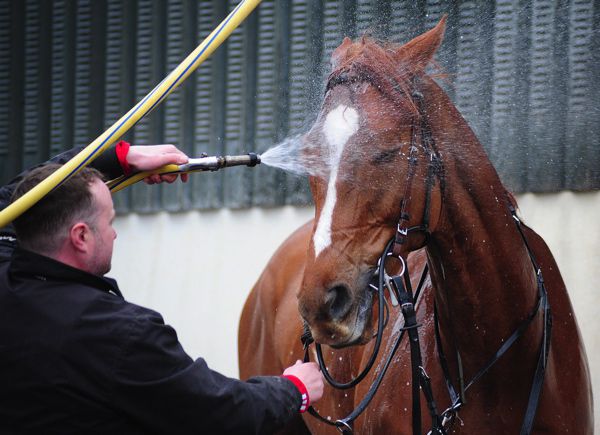 Samcro could make his eagerly-awaited debut over fences in the Advanced NI Scaffolding Beginners Chase at Down Royal on Friday.

The Gordon Elliott-trained seven-year-old was among 16 entries for this near two-and-a-half-mile event which could see him return after a 307-day absence.

The Gigginstown House Stud-owned gelding looked a potential superstar when extending his unbeaten record to seven in the Ballymore Novices’ Hurdle at the 2018 Cheltenham Festival.

However, Gordon Elliott’s charge suffered a heavy fall in the Punchestown Champion Hurdle that April and ran below par in three starts last season — the latest when fifth in the Ryanair Hurdle at Leopardstown’s Christmas meeting.

Samcro was subsequently found to be suffering a lung infection, which ultimately ruled him out for the remainder of the campaign.

The Elliott-trained Coeur Sublime, runner-up in last season’s Triumph Hurdle, is one of nine entries for the Grade Two WKD Hurdle.

The County Meath handler has a second string to his bow in Coko Beach, runner-up in the Fred Winter at Cheltenham in March.

Honeysuckle, from the De Bromhead stable, could try to take her 100 per cent record under Rules to five after tasting Grade One success in the mares’ novice hurdle final at Fairyhouse in April.

Elliott is responsible for three of the 11 possibles for the Grade Three Lough Construction Ltd EBF Mares’ Novice Hurdle.

His trio is made up of Ard Abhainn, who has yet to run over hurdles, Fairyhouse maiden hurdle scorer Daylight Katie and Mount Ida, who got off the mark over the smaller obstacles at Galway on Sunday.

The Elliott inmate, owned by Cheveley Park Stud, won all his four races last term and was sent off a short-priced favourite on every occasion.

“The plan is to run at the moment. I think Gordon is happy with him, he’s summered well, so hopefully we can creep away with him and see what happens,” said Cheveley Park Stud’s managing director Chris Richardson.

Elliott has also put in Escaria Ten, Fury Road, Multifactorial and Run Wild Fred among a 23-strong entry for the two-and-three-quarter-mile contest.