See Double You bids for 'fairytale' in Southwell 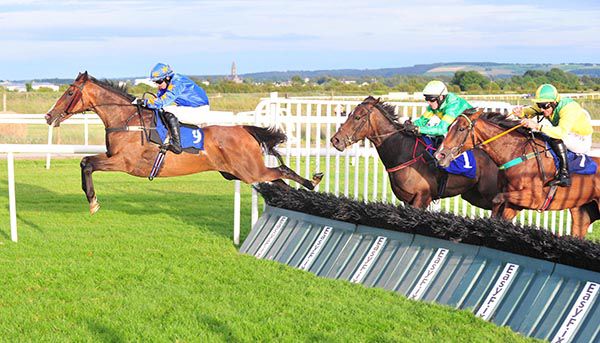 See Double You in front at Roscommon
© Photo Healy Racing

Trainer Ronan McNally is keeping his fingers crossed the remarkable See Double You can claim another “fairytale” victory at Southwell today.

The 16-year-old became the oldest horse to win under rules in Ireland in 32 years when striking gold under 19-year-old jockey Darragh O’Keeffe in a handicap hurdle at Roscommon last week — his 11th career success overall, including three point-to-point successes.

He will revert to the larger obstacles just seven days later for the Rotary Foundation End Polio Handicap Chase — with leading jockey Aidan Coleman booked for the ride.

McNally said: “He seems to have come out of last week really well. He’s due to go up 6lb over fences in Britain at the end of the week, and we’ve decided to turn him out before that happens.

“I’ve been looking for an excuse not to run, to be honest, but I can’t find one. He scoped clean — and I schooled him myself over two fences this morning and I was kind of hoping he might be a bit sticky — but he flew them.

“He’s a horse who definitely knows when he’s won — he thrives on it.”

If See Double You can emerge victorious, he will become the first 16-year-old to win over fences in Britain since Bishopdale landed a handicap chase at Hexham in 1997.

“He won in Britain as a 15-year-old at Hexham last September, so it would be brilliant if he can go back and do it as a 16-year-old as well. I think he’d be the first 16-year-old to win over fences in 22 years,” the trainer added.

“I’d liked to have ridden him myself, but he’s only carrying 10st 1lb and I’d need to chop both of my legs off to do the weight!”

Asked whether this could be See Double You’s final outing, McNally said: “If he does win, I think we’ll probably let him bow out, rather than waiting for me to ride him somewhere.

“It would be a fairytale if he could do it.”