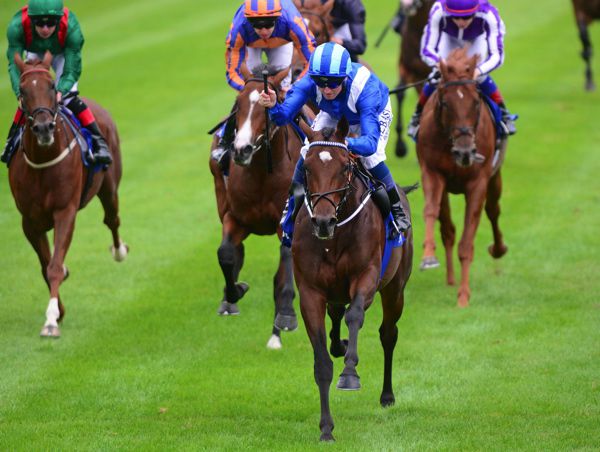 It could be a big weekend for owner Hamdan Al Maktoum, who has solid Investec Oaks and Derby chances with Maqsad and Madhmoon respectively.

There would barely be a more popular winner than Madhmoon, trained in County Kildare by octogenarian Kevin Prendergast, and he brings strong form to the table, having finished fourth in the 2000 Guineas — and has a victory over the well-fancied Broome to his credit.

“They always used to say ‘fourth in the Guineas, first in the Derby’,” said Angus Gold, the owner’s racing manager.

“Obviously he’s going to have to improve, but it was a good run in the Guineas. He was a little outpaced before staying on, and (jockey) Chris Hayes said he went a long way up the hill.

“Chris thinks he’ll definitely get further. I’m sure he’ll get a mile and a quarter — but whether he gets a mile and a half is something only Saturday will tell us.

“His sire (Dawn Approach) didn’t get the trip, but that doesn’t mean he won’t. This is as good a place as any to discover it.”

The William Haggas-trained Maqsad was a maiden through the winter but has won both her starts at Newmarket this season, the most recent by five lengths.

“Maqsad is a big filly who we always thought a fair bit of last year, but for whatever reason it didn’t work out,” added Gold.

“She’s come a long way this season. She won well last time, but I just hope she handles the track because she is quite big.

“It’s not guaranteed that she’ll stay the trip. She’s by a fast horse (Siyouni) — who was by Pivotal, who can get them to stay — but Siyouni is out of a Danehill mare, and Maqsad is bred 3×3 to Danehill, so there is no guarantee.

“However, there is stamina on her female side because the dam is by Galileo. So it’s in the lap of the gods a bit, but she’s got plenty of class and hopefully that will get her a long way — we’ll just have to see whether it gets her the whole way.

“Heading there with a chance in both Classics is why we are in this game.”