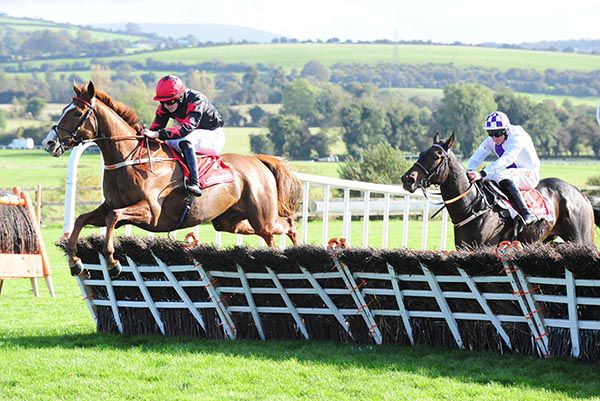 The son of Whitmore's Conn landed a gamble when winning at Fairyhouse on Saturday and today, under a mandatory 5lbs penalty, made most of the running under McInerney to beat fast-finishing runner-up Dawson's Cottage by three parts of a length.

The runner-up Dawson's Cottage met traffic problems on the inside approaching the final flight and had to be switched by his jockey Niall Madden to challenge early on the run-in before finishing strongly for a never-nearer second placing.

Shumaker's win was Traynor's third since taking out his trainers' license in May and he later stated “I have four of my own in training. I’ve a couple of two-year-olds to come into me and another couple to go either in a bumper or maiden hurdle when the ground gets a bit softer over the winter time.

“It’s just me and my partner that ride away ourselves and I’m shoeing horses in the afternoon as well.”

He added “Donal gave him a super ride; he kept it simple like Darragh (O’Keeffe, suspended today) did the other day at Fairyhouse and he jumped like a buck. I thought we were going to get caught there near the end.

“He won his point-to-point on soft to heavy at Portrush so he’s quite adaptable with the ground. Fingers crossed he’ll come out of this good and we’ll line something up again.”