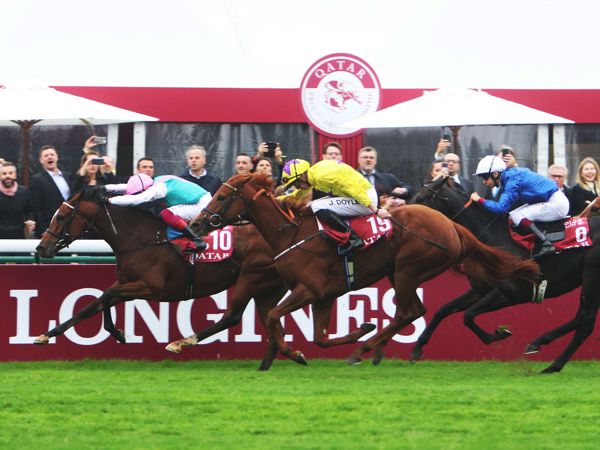 Enable will break from stall nine when she bids for an historic third victory in the Qatar Prix de l’Arc de Triomphe.

John Gosden’s brilliant mare became the eighth dual winner of Europe’s premier middle-distance contest last season, and was kept in training as a five-year-old with the chief aim of becoming the first horse to win the race three times.

While she endured a troubled preparation last term, the current campaign has been faultless as she has stretched her top-level tally to 10 with a hat-trick of Group One wins in the Coral-Eclipse at Sandown, the King George at Ascot and the Yorkshire Oaks at York.

The Khalid Abdullah-owned superstar is an odds-on favourite to claim what would be a momentous success at ParisLongchamp on Sunday under Frankie Dettori.

Enable will be flanked in the starting stalls by the Aidan O’Brien-trained pair of Magical and Japan.

Irish Champion Stakes winner Magical — who will be ridden by the trainer’s son Donnacha — is in stall eight, with her Juddmonte International-winning stable companion Japan in 10 in the hands of Ryan Moore.

All 12 remaining entries stood their ground at the final declaration stage, and Charlie Appleby’s Ghaiyyath — so impressive on his latest appearance in Germany — is widest of all in stall 12 under William Buick.

Jean-Claude Rouget’s Prix du Jockey Club hero Sottsass is widely considered the chief hope for the home team, and he is drawn right against the inside rail in stall one. Rouget has a second string to his bow in the supplemented Soft Light, who is in six.

Andre Fabre relies on Waldgeist (stall three) as he bids to add to his record tally of seven Arc wins.

The latter was third behind Waldgeist in last month’s Prix Foy on his French debut — and will be ridden by dual Arc-winning jockey Christophe Soumillon, who was successful aboard Dalakhani in 2003 and the brilliant filly Zarkava in 2008.

He told France Galop: “I think that his return race in the Prix Foy should sharpen him up. He worked well last week — and although he performed very disappointingly in the Prix Foy in relation to what we have come to expect from him, the forecast soft ground on Sunday should enable him to come on for the run.

“We’ve seen many horses turn in below-par efforts in the Arc trials — before turning it on come the big day. Let’s hope that this example will apply to him on Sunday.”

Of Enable, the Belgian-born rider added: “Enable is the world’s best racemare. However, even the very best performers can get beaten.

“In order to win the Arc, you also need a horse with considerable powers of acceleration, which is a necessity to be able to win at ParisLongchamp.

“I believe that the French horses can beat their British counterparts on this particular track — owing to their ability to deliver a sprint finish — taking into account that the English raiders are more galloping types, whose toughness comes into play.”