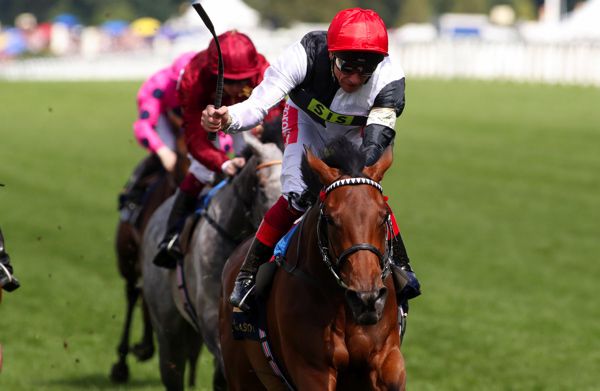 John Gosden has supplemented the Royal Ascot winner Star Catcher for Saturday's Kerrygold Irish Oaks and she is likely to be joined by at least one Ralph Beckett-trained runner as overseas trainers eye a ninth win in eleven runnings of Ireland's penultimate Classic of the season.

O'Brien's father Aidan has six of the remaining field, including the Epsom Oaks runner-up Pink Dogwood and Fleeting who was third at Epsom before finishing second to the supplemented Star Catcher in the Ribblesdale Stakes last month.

"We are very much looking forward to the Kerrygold Irish Oaks this weekend and have left six in the race at the moment. We would be thinking that Fleeting, Pink Dogwood, Peach Tree and maybe something else will run.

"Fleeting seems to be fine since Ascot and everyone is happy with her," O'Brien reported.

"Both Fleeting and Pink Dogwood ran close together in Epsom and ran very well and have run well since then too.

"I thought Pink Dogwood ran very well the last day in the Pretty Polly but she is going back up in trip again and we're looking forward to it. We're thinking Peach Tree could run as well and maybe one more."

Thirteen of the last 20 renewals of the Kerrygold Irish Oaks have gone for export with Aidan O'Brien, Jim Bolger and the late Paddy Mullins the only Irish trainers to celebrate victory in the race during that time.

Ralph Beckett is hoping to become the latest English-based trainer to join the race’s roll of honour.

Trainer Archie Watson is responsible for the sole British representative in the Jebel Ali Racecourse Anglesey Stakes with Gulidsman getting an entry. The Group 3 race is where the two-time Aidan O'Brien-trained winner Pistoletto is being targetted.

On Sunday, Watson will be hoping to land his biggest success to date in Ireland when he saddles Soldier’s Call for the Group Two Friarstown Stud Sapphire Stakes.