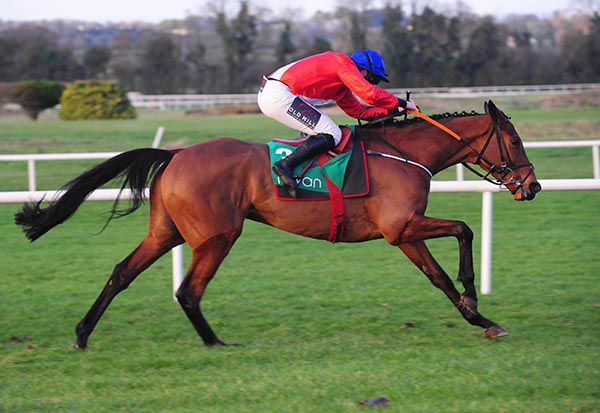 Irish trainers have assembled another powerful team to try to extend their domination of the Weatherbys Champion Bumper.

The champion bumper prize has gone to Ireland in 19 of its 26 runnings — including once each in the last two years for Gordon Elliott and Willie Mullins.

The latter is bidding for a remarkable 10th success in the race — and he supplies the well-fancied Blue Sari as well as Mt Leinster this time.

That is an unusually small potential contingent from the Irish champion. But in total his compatriots are responsible for 12 of the 28 entries, including the unbeaten Envoi Allen, Abacadabras and Daylight Katie for his great rival Elliott.

Leading home hopes include Harry Fry’s Get In The Queue and Colin Tizzard’s Master Debonair.

Elliott’s 2018 Grand National winner Tiger Roll is set to bid first to retain his title too in the Glenfarclas Cross Country Chase next month, one of 28 entries for that race which takes place like the Bumper on Cheltenham’s Ladies Day — Wednesday, March 13.

Entries for the Dawn Run Mares’ Novices’ Hurdle and the St James’s Place Foxhunter Chase have also been announced.

Mullins, who has won all three runnings of the former to date, has 13 of the 40 entries — while Henry de Bromhead’s Honeysuckle and Nicky Henderson’s Epatante are respectively the leading hopes for Ireland and Britain.

In the Foxhunter, Paul Nicholls’ Pacha Du Polder remains on course for an unprecedented hat-trick of titles — although there is strong opposition among the 35 entries, from either side of the Irish Sea, led by Enda Bolger’s Stand Up And Fight and Philip Rowley’s Hazel Hill.

The weights have also been revealed for Cheltenham’s 10 handicaps, with the stage now firmly set for the opening day on Tuesday, March 12.