The Worlds End has Leopardstown option 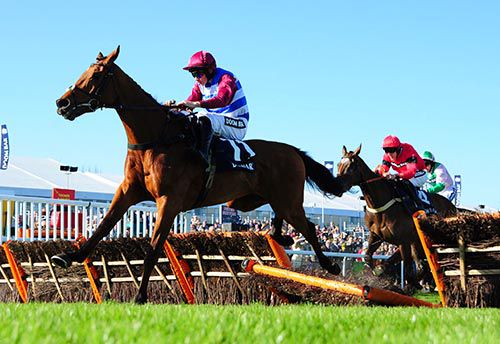 Tom George is undecided as to whether to let The Worlds End have another crack at Paisley Park in the Marsh Hurdle at Ascot.

An impressive winner on his reappearance at Wetherby, the eight-year-old went in search of a Grade Two double in last Friday’s Long Distance Hurdle at Newbury, but had to make do with minor honours in third behind Emma Lavelle’s star stayer and the veteran Thistlecrack.

George will let the dust settle before deciding whether to let his charge take on Paisley Park again in the Marsh Hurdle — better known as the Long Walk — on December 21, or travel to Ireland for the Leopardstown Christmas Hurdle a week later.

George said: “I’m not sure where we’re going yet. He is entered in Ireland as well over Christmas, so we’ll see.

“We were pleased with the way he ran at Newbury. He was giving 6lb to Thistlecrack, but Paisley Park beat us fair and square and how we turn the odds on him, I’m not quite sure.

“We just have to do the right thing by our horse. He seems to have come out of the race well and as he’s getting older, I think he’ll appreciate a bit softer ground.”

The Worlds End, Paisley Park and Thistlecrack are three of 12 entries for the Marsh Hurdle.

Nicky Henderson has Call Me Lord, L’Ami Serge, Top Notch and William Henry in contention, while Harry Fry is likely to saddle his Coral Hurdle winner If The Cap Fits.