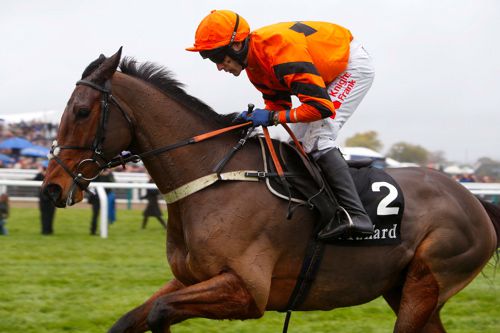 Thistlecrack will have a racecourse gallop at Exeter on Wednesday as the Tizzard team continue his build-up towards a fourth run in the Ladbrokes King George VI Chase at Kempton.

The 11-year-old won the Boxing Day feature as a novice in 2016 — and while he has had his injury problems in the interim, he also finished fourth in the 2017 renewal and second last year at the Sunbury venue.

Joe Tizzard, assistant to his father Colin, reports this month’s Long Distance Hurdle at Newbury as Thistlecrack’s intended comeback — with the Exeter spin to be followed by a similar trip to the Berkshire venue next week.

He said: “He is going to have a gallop after racing at Exeter on Wednesday. It’s just an away day for him. He will gallop round there over two miles — then he will gallop at Newbury next Tuesday.

“Timing-wise, only the Long Distance Hurdle fits in to give him a spin as a prep run before the King George. We want him 100 per cent for that, because I think his best chase form has been in the King George.

“That was one of the best performances from our horses last season, and it was only 11 months ago. We hope there is enough fire left in the belly for one more big one.”

Kilbricken Storm failed to sparkle last term, but Tizzard is hoping for a decent run at Haydock on Saturday week.

He said: “The plan is to go to Haydock a week on Saturday for the Grade Three staying hurdle up there. He will have a gallop at Exeter as well tomorrow first, though.

“It never really went to plan over fences for him last season — then he had a stress fracture of his pelvis over Christmas.

“The season before, his form was strong, and he beat the likes of Santini and Bacardys at Cheltenham. He seems good back at home, but only time will tell if he is.

“Off 145, if he is the horse of old, he could well have a good chance at Haydock. It’s a good place to start him — and if he was competitive, he could end up being a Stayers’ Hurdle horse.”

Robinsfirth has the Ladbrokes Trophy at Newbury in his sights — and he will also be in gallops action at that track next week.

Tizzard said: “It was a decent performance up at Haydock in the National Trial on his last start. He is going to have a couple of away days to put him right — starting at Exeter, then he will go to Newbury on Tuesday as well.

“We’ve tweaked his wind as well. He is a competitive horse in the right grade. We thought about giving him a spin over hurdles, but having these two gallops will equate to that. When he is on song he is decent — but he is fragile.”

The Tizzards may be well-represented in the Ladbrokes Trophy — with Elegant Escape and Mister Malarky also in the mix for the big handicap at the end of this month.

Tizzard said: “Elegant Escape has not been entered in the Becher Chase. He is in the Betfair Chase, but the likelihood is that he will turn up in the Ladbrokes Trophy.

“After that, he will perhaps have another tilt at the Welsh National.”

Of Mister Malarky, he added: “He was a real head-scratcher at Ascot.

“We thought he was fit and well at home — then he threw in a stinker. He just made one mistake, and that might have scared him. He came out of the race OK, and seems absolutely fine at home.

“He will go to Newbury for a gallop on Tuesday, and I think he will run in the Ladbrokes Trophy because it has been the plan all along. It wasn’t the ideal prep race, but he has been dropped 1lb since — and hopefully we can see something better at Newbury.”