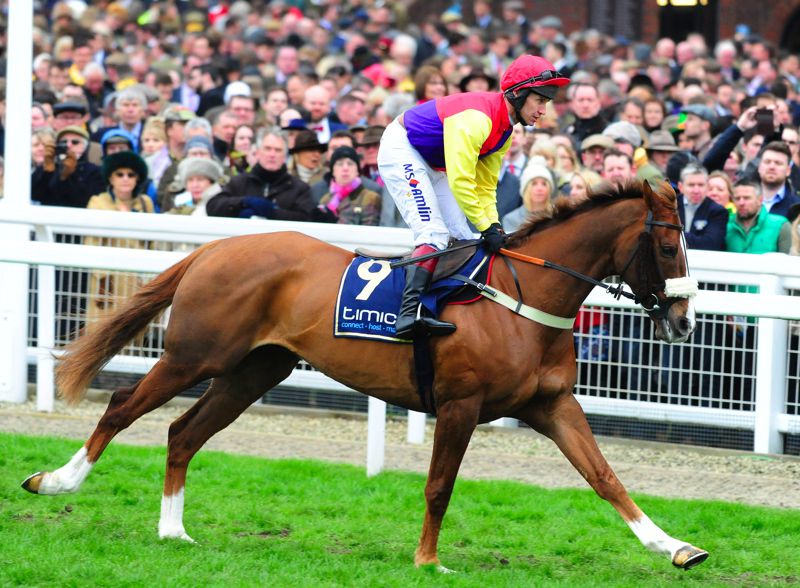 No horse has successfully defended the coveted title since the former Henrietta Knight-trained gelding recorded the last of his three consecutive victories in 2004.

Recent history may be against Native River, who has been defeated in the Betfair Chase and King George VI Chase this season, but Tizzard senses a return to Cheltenham can help his stable star get back on track.

The Dorset trainer said: “He is a Gold Cup winner that got beat by a very good horse around Haydock first time.

“When he went out in the Feltham (Novice Chase at Kempton) in 2015 he was always looking to go out left-handed, and he’s done exactly the same in the King George.

“Five out, you thought he was going to pull up, but he stayed on really strongly — and on the line, you would say if had another two furlongs he would be right up there with them.

Tizzard is happy that his reigning champion sets the standard.

“There are young horses coming through, but that doesn’t concern me at all,” he added.

“We’ve had a lovely preparation with him, and not run the legs off him all winter.

“The race will be a stamina race — and if he is on song, which he should be, he has got as good a chance as he did last year. ”

With the nine-year-old having a preference for soft ground, Tizzard will be doing his best rain dance to help ensure Native River, who recently took part in a racecourse gallop at Wincanton, has his ideal conditions.

He said: “I hope Cheltenham put on plenty of water this week, and then it rains like hell, so it will be nice and heavy ground.

“We don’t want Cheltenham being quick . We want to have it on the slow side for all horses — so all these beautiful horses racing on it come back fine.

“He has got a beautiful low action, but he is better on softer ground than quicker ground.”

While the market would suggest the Pat Kelly-trained Presenting Percy, winner of last year’s RSA, is the chief danger, Tizzard has warned not to dismiss his other two Gold Cup contenders Thistlecrack and Elegant Escape.

He said: “Obviously he (Presenting Percy) is a very good horse, and they have their reasons for only running him once. I’m sure they are happy with him, how he is. He is a good horse in his own right — and that is why he is favourite.

“Thistlecrack is a cracking horse. He has won a King George and he got quite close at Kempton to Clan Des Obeaux (this season).

“He is 11 years old, and you can’t get away from that, but he has proved he has good form round Cheltenham.

“Elegant Escape has won a Welsh National and been second in a Ladbrokes Trophy. He has done everything right and is a young, improving horse.

“He has looked very good on the gallops this week, and he is the one that is still improving. His last run was his top rated one — and you must not ignore him.”