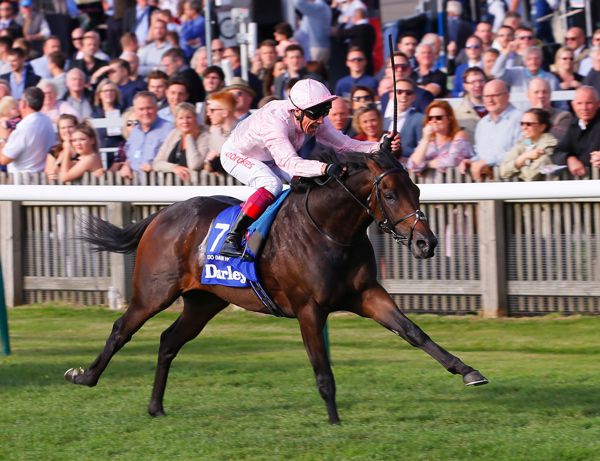 Too Darn Hot got his career back on track with a clear-cut victory in the Group One Prix Jean Prat at Deauville.

Last year’s champion juvenile was unbeaten in four races at two, but this season had not gone to plan as a problem with a splint ruled him out of the 2000 Guineas before he made his reappearance over 10 furlongs in the Dante at York.

While not disgraced in second, connections felt his undoing was the trip and he reappeared just over a week later in the Irish Guineas, where he was beaten by Charlie Hills’ Phoenix Of Spain.

It was then on to Royal Ascot where he was outbattled over a mile by Circus Maximus and King Of Comedy, so John Gosden dropped him down in trip again.

Run over seven furlongs for the first time, the Prix Jean Prat attracted 12 runners but none could match Too Darn Hot and it all went smoothly.

Hot on the heels of Enable’s Coral-Eclipse win and an incredible Royal Ascot, Frankie Dettori took up the running over a furlong out on Too Darn Hot and he had a couple of lengths to spare over Charlie Appleby’s Space Blues, with the Richard Hannon-trained Fox Champion third.

“An easy, flat mile would be no problem — just stop running over an extended mile and a quarter and stiff miles. He was a very fast two-year-old, the champion, he’s proved what he can do. This is very quick ground, but he’s handled it well.

“We’re thrilled with him. Finally the trainer and the racing manager have got it right and the horse has got us out of trouble.

“He’s a beautiful colt, very quick — it’s what you want for stallion purposes — but we stupidly tried to stretch him out. He did have an interrupted preparation, though.

“He was lame when the Guineas was run, then we rushed him to York and then rushed to Ireland, so we’ve done everything badly and the horse has got us out of trouble.”

Dettori added: “It felt great and I’m pleased for the horse. He travelled great, put the race to bed good and showed his old turn of foot.

“Hopefully this race will give him confidence and there’s more to come.

“He’s very fast, it’s well documented nothing has gone right for him, this was a better track for him.

“He’s won a Group One as a three-year-old, so I’m delighted.”

There was earlier British success in the Prix Kistena as James Tate’s good form continued with Far Above.

He took his record to three wins from just four outings under an impressed PJ McDonald.

“He travelled a little bit too well, they couldn’t go quick enough for me,” said the rider.

“By halfway he got his head down and once I switched to the outside, he was always going to win.

“I know he’s only won a neck, but he won easier than the margin suggests.

“At the start I thought he was going to be a miler, but with racing and maturity he’s definitely getting quicker, so it’s up to connections what they want to do.”