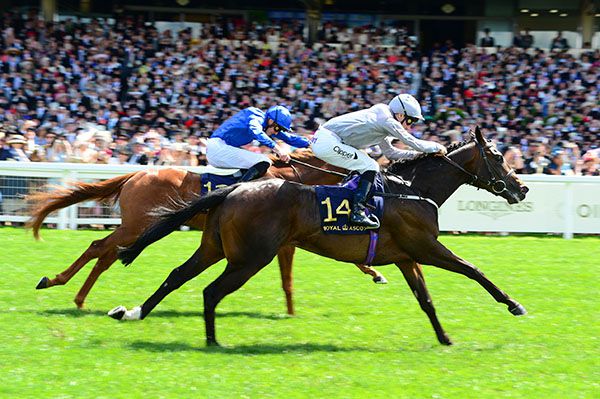 Danny Tudhope claimed his fourth winner of the week at Royal Ascot when steering Space Traveller to a narrow victory in the Jersey Stakes.

Richard Fahey’s charge was largely unconsidered at 25-1 for the seven-furlong Group Three, with Space Blues the 5-2 favourite to complete his hat-trick for Charlie Appleby and James Doyle.

Space Blues looked set to deliver after weaving his way to the front, but Space Traveller refused to be denied and passed the post a head to the good.

Angel’s Hideaway was third ahead of Urban Icon in fourth.

Fahey said: “You would have to say (a big surprise) on his form. We did like him last year. He has bounced back to what we felt he might be, but it is a shock.

“We went to France over six furlongs and thought we would win and give him a confidence booster, but it didn’t go right for him. But seven is probably his trip. He might even get a bit further now.

“Steve (Parkin) owner is not here today, he is at a very important meeting and couldn’t make it. He told us how to ride him — ride him cold — and we were agreeing with it.”

He added: “Danny is riding out of his skin and it is a huge result for him. It’s great for us poor little northern trainers!

“That’s the next step for him, the Lennox (at Goodwood) — something like that and that would suit him well. It is the only place we can go really.”

Tudhope said: “It’s been an amazing week for me — I can’t describe it. Thank you to everyone that has helped me.

“I’ve had some great support this year. When the southern trainers come up north, I get a lot of rides from them.

“I’m pinching myself a little bit as I didn’t expect to get four winners. I have to pinch myself to make sure it’s real, but I’m enjoying it. I’m riding for good people and riding good horses.”

“It was a surprise, but I’m chuffed.”

Appleby said of Space Blues: “I think we’ll end up coming back in trip with this horse.

“He has an abundance of pace and quickens up well. He quickened well there and we thought he was going to put the race to bed. Take nothing away from the winner, he battled away with us.

“James said ours went through the line, but I think going forward we’ll be coming back in trip.

“We could go to six or six and half — maybe the Prix Maurice de Gheest.”