Veracious not to be denied in a thrilling Falmouth Stakes 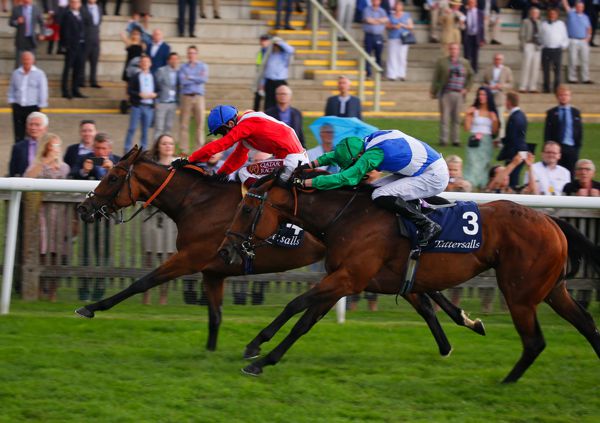 Veracious repelled the late surge of One Master to claim a thrilling renewal of the Tattersalls Falmouth Stakes at Newmarket.

The Sir Michael Stoute-trained filly looked a future Group One winner after finishing third in both the Coronation Stakes at Royal Ascot and the Nassau Stakes at Goodwood last summer, but her first three starts of the current campaign were a shade underwhelming.

However, a change of tactics did the trick on the July Course under a tremendous front-running ride from Oisin Murphy.

A smart start allowed Murphy to bag the rail and the Cheveley Park-owned Veracious was soon leading her five rivals.

Having been last of all at one stage, the William Haggas-trained One Master cruised into contention under a confident James Doyle — and it looked a case of when rather than if she would claim the lead.

However, 6-1 shot Veracious refused to bend and clung on by a neck, with Aidan O’Brien’s 5-2 favourite I Can Fly almost three lengths away in third.

Stoute said: “It was a very brave performance and Oisin rode her beautifully. He had a sit on her at Ascot. She ran very well at Ascot, but was doing a little too much and we didn’t want that to happen today. We wanted to let her flow.

“She has taken a long time to ripen (this season). Ryan (Moore) rode her in work 10 days ago and said ‘she is there now’.”

Veracious is once again entered in the Qatar Nassau Stakes on August 1, while she also has the option of taking on the boys in the Sussex Stakes the previous day.

“We have a lot of choices, she has got form at mile and a quarter in the Nassau last year. We don’t have to decide that today and we will take our time. She is well entered,” Stoute added.

“At Ascot we wanted a lead, as we got a lead at Epsom. We just tried to switch her off, so we decided to change the tactics.

“She has got some very good form. Cheveley Park have been wonderful supporters and I’m always thrilled to win a good race for them.”

Murphy — who is currently battling it out with Danny Tudhope in the race to be crowned this season’s champion jockey was understandably thrilled to ride his first Group One winner of the campaign.

He said: “They have done a fantastic job at home with her. She was a little bit fresh and we went to post last. Thankfully the first two furlongs were smooth and chilled.

“I got a bit of confidence from Sir Michael Stoute. She was well beaten at Group Two level last time against a similar field, but he would not run her in a Group One for no reason.

“I was not sure if she would hold on, but she gave it her all. This was a spare ride at Ascot as I was supposed to ride Rawdaa but I was jocked off, so maybe I was lucky to get on her in the first place.”