Waldgeist foils Enable in the Arc 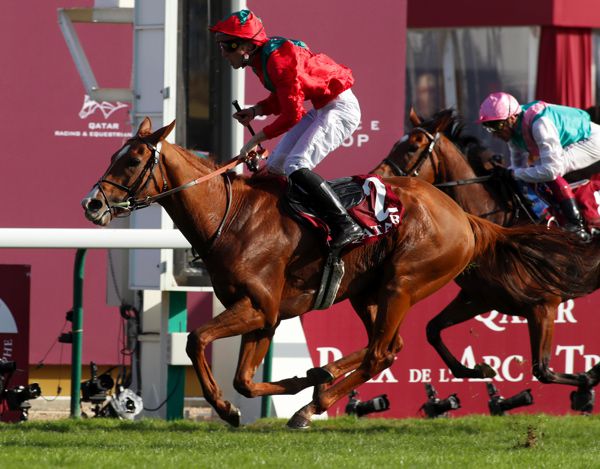 Enable had to make do with the runner-up spot in her bid for history and a third victory in the Qatar Prix de l’Arc de Triomphe as Waldgeist provided Andre Fabre with a record eighth success.

Having stretched her Group One tally to 10 with victories in the Coral-Eclipse, the King George and the Yorkshire Oaks this season, all eyes were on John Gosden’s brilliant mare as she aimed to become the first three-time winner of Europe’s premier middle-distance contest.

Frankie Dettori had to niggle the 4-6 favourite along during the early stages, but she was back on the bridle at the top of the home straight and looked well positioned to race into the record books.

Once asked to quicken, Enable did manage to pull clear — and the packed grandstands in Paris roared in expectation.

However, her stride began to shorten in the final furlong on the testing ground and she was unable to resist the fast-finishing 16-1 shot Waldgeist — fourth in last year’s renewal and beaten by Enable on each of the three previous occasions they had met, but a length and three-quarters too good this time.

Fabre said of the Pierre-Charles Boudot-ridden winner: “I always hope for the very best when I run my horses in the Arc, which of course is a very special race for me. With Waldgeist, he carried by highest expectation.

“I knew the ground would be very testing, but I look back to his days as a two-year-old, when he won in the heavy, and that made me more confident that he would finish his race off well.

“I don’t know whether he will run again this year and I will talk to the owner about that.”

He added: “I’m very proud that Waldgeist managed to beat such a fantastic mare, it’s well deserved in some ways. What can I say? I’m delighted.”

“Whatever happened it (decision on future) wasn’t going to be in a hurry, and I think we will get her back (and see). Prince Khalid will want to reflect on all the various possibilities, give it some good thought — and hopefully we’ll come up with a good answer.

“How can we complain? She’s been the most fantastic filly. Prince Khalid has just enjoyed every moment of her. It was not what we all wanted obviously but in the end we have to accept these things in racing.

Dettori felt the ground had taken its toll on Enable in the closing stages.

He said: “The ground was very sticky and I struggled in the first bit of the race. I let her find her feet and she came good to me in the false straight. I waited for the 300 metres (marker), but didn’t find as much as I thought.

“She just folded a bit and the winner was too good for me today, but my filly was already tired. I passed the 200 (metre pole) and I was a spent force then.

“I think ground had a lot to do with it.”

Gosden said: “She ran a great race — she just got outstayed on the ground. She’s run a lovely race and I couldn’t be more pleased with her.

“Waldgeist handled the ground and outstayed her in very testing conditions. He’s a fine horse, trained by Andre and owned by a good friend of mine.

As with Enable, connections of Waldgeist will take their time in considering the next move.

Part-owner Dietrich Von Boetticher said: “Winning the Arc is something you always want to achieve and try to do.

“Of course we were concerned about the ground today, which was a challenge. Even though the horse has become stronger, I didn’t expect him to finish like that — he really exploded.

“I think a good horse will handle any ground and that’s what he did today.

“In truth, I didn’t think there was a horse in the world that could beat Enable. We felt all we could do was to try and Andre was positive.”

Asked about a potential trip to America for next month’s Breeders’ Cup Turf, he added: “My feeling is that you should never exhaust a horse and this is all about what’s good for Waldgeist and not what’s good for the owners.

“I’ve known Andre Fabre for a long time and he would never approve a decision that he himself didn’t think was right.

“At this point, there is no decision.”