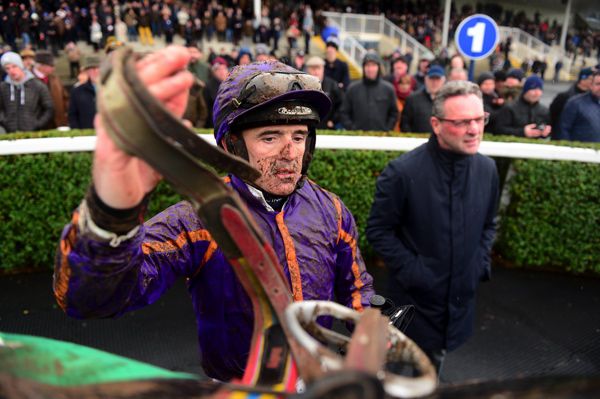 Ruby Walsh insists he is fit and ready to go ahead of next week’s Cheltenham Festival.

The winning-most jockey in Festival history with 58 victories to his name, Walsh has suffered his fair share of ups and downs in the last couple of years — breaking his leg at Punchestown in November 2017 and again at Cheltenham in March last year.

He has not been seen in competitive action since suffering a fall at Thurles on February 21, but could return to the saddle this weekend in preparation for the biggest four days in the calendar.

Walsh said: “I’m fine after the fall in Thurles. I got a kick in the foot and it was sore for a few days, but I’m busy riding out now.

“We only had three runners at the weekend so I didn’t have much to ride. If Willie (Mullins) has something for me to ride this weekend I’ll ride it.”

Walsh enjoyed a double on the opening day of last year’s Festival — steering Footpad to a runaway success in the Arkle Trophy before landing the Mares’ Hurdle aboard Benie Des Dieux.

However, he was brought back down to earth with a bang the following afternoon after he broke his leg again in a fall from Al Boum Photo in the RSA Insurance Novices’ Chase.

“What happened last year at Cheltenham is racing,” said Walsh, who was speaking at a press conference in Dublin in his role as an ambassador for Paddy Power.

“I’ve been very lucky as I first rode at Cheltenham when I was 18 and since then I’ve only missed a few days (at the Festival) in all that time,”

“We are strong in the championship races, but that said, Willie Mullins could win the Champion Hurdle, the Stayers’ Hurdle, the Ryanair Chase and the Gold Cup and Ruby Walsh might not ride any of them.

“Getting on the right ones could be a pick in itself.”

Walsh will have a number of difficult decisions to make at Cheltenham next week — most notably in the Magners Cheltenham Gold Cup.

Mullins looks set to field a four-strong team in the blue riband — which has famously eluded him so far — with Irish Gold Cup winner Bellshill and runaway Savills Chase scorer Kemboy set to be joined by the aforementioned Al Boum Photo and Thyestes Chase winner Invitation Only.

Walsh is not committing to which horse he will ride at this stage, but did say: “I’d be leaning in a certain direction all right.”

Assessing the quartet, he said: “Bellshill improved a lot from Christmas and it’s always a great feeling when you just get up to win by a narrow margin — as he did last time. It was a good run and he’s going in the right direction.

“Al Boum Photo’s run in Tramore on figures was an exceptional performance, but it will be a different day and a different track. I think three and a quarter should bring about improvement in him, but he has a bit find with Presenting Percy.

“Kemboy has been improving since he came back from Cheltenham last year. He was very good at Christmas, but he got a good ride (from David Mullins) as well.

“I don’t think he was flattered by that win. He got into a great rhythm at the front and jumped super down the back. Monalee and Bellshill turned in a hell of a lot closer to him than they were at the winning post.

“He quickened to the last, but from the last to the line he put a fair bit of distance between himself and the others.

“Invitation Only probably has the most to improve. He was good in the Thyestes, but Rathvinden beat the runner-up Alpha Des Obeaux subsequently as well. Stepping up to three miles brought about improvement and maybe going three and a quarter will bring about more improvement.”

Walsh appears almost certain to partner the exciting mare Laurina in the Unibet Champion Hurdle — in preference to stablemates Melon and Sharjah.

He said: “I don’t know how good Laurina is, and I suppose if I knew it would remove some of the uncertainty, but if you knew it means you would also know her limitations.

“She gives you a great feel and she couldn’t have done any more than she’s done in her two runs this year, but there will be a lot more required in the Champion Hurdle against Buveur D’Air and Apple’s Jade.

“The potential is there, but that has to be developed into reality.”

Walsh reported 2015 Champion Hurdle hero Faugheen in “great form” ahead of his tilt at the Sun Racing Stayers’ Hurdle and nominated Benie Des Dieux as his “best chance of a winner” at this year’s Festival as she prepares to defend her Mares’ Hurdle crown.

Mullins is likely to split star chasers Min and Footpad — but which horse will run in the Queen Mother Champion Chase and which will run in the longer Ryanair Chase remains to be seen.

Walsh said: “Min would be a Supreme (Novices’ Hurdle) and a Champion Chase winner without Altior, but unfortunately Altior is around, so he’s not.

“It will be a big discussion to be had whether he or Footpad goes two miles or two and a half.

“Footpad was spectacular last year in a very strongly-run Arkle It’s a long time since he’s raced further than two miles, so it will be a long debate that will need to be had.”