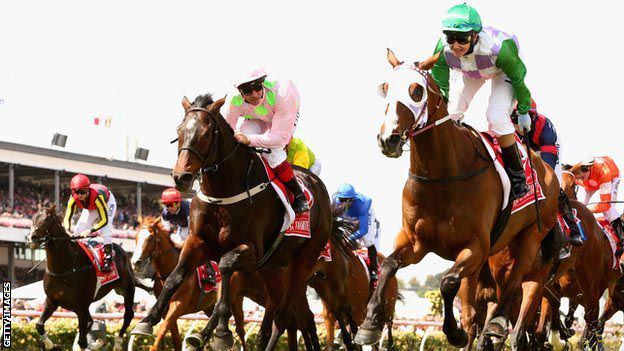 It was subsequently announced on Friday that — following Weir’s arrest and release without charge after search warrants acted upon by Victoria Police at two properties — he and McLean were both issued show-cause notices over the possible suspensions of their licences and refusal of entries.

confirmed four ‘jiggers’, which are taser-like devices, an unregistered gun and

a substance believed to be cocaine had been seized.

Melbourne Cup winner Prince of Penzance, who was famously partnered by Michelle Payne to become the first woman to win the coveted prize.

Three further charges are summarised: failure to give evidence at an inquiry, failure to comply with a direction of the stewards (alternative to previous charge) and conduct prejudicial to the image, interests or welfare of racing.

McLean faces four charges, as follows: possession of an electric or electronic apparatus capable of affecting the performance of a horse, failure to give evidence at an inquiry, failure to comply with a direction of the stewards and conduct prejudicial to the image, interests or welfare of racing.

Both trainers will face the charges in a hearing on a date to be fixed.

Pending their show-cause hearing on Monday, all their horses currently entered will be withdrawn under an interim order by the stewards.

RV’s integrity services chief Jamie Stier said: “The stewards have imposed an interim order that all horses accepted to race from the Darren Weir and Jarrod McLean stables from tonight at Moonee Valley through until Monday be withdrawn with immediate effect pending the conduct of a show-cause hearing.

“The stewards are concerned about the seriousness of the threat posed by Mr Weir’s and Mr McLean’s alleged possession of an electronic apparatus. This is a significant issue in terms of animal welfare and racing integrity.

“The investigation has caused considerable public concern, and has generated considerable negative publicity — bringing into question the impact on the image, interests and integrity of racing of Mr Weir and Mr McLean’s continued participation in racing pending the hearing of the charges.

“The stewards also have significant concerns regarding the negative adverse publicity relating to police involvement in relation to Mr Weir and Mr McLean’s training activities is having on public confidence in racing.”