'Blame the French trainer' as De Velara returns in triumph 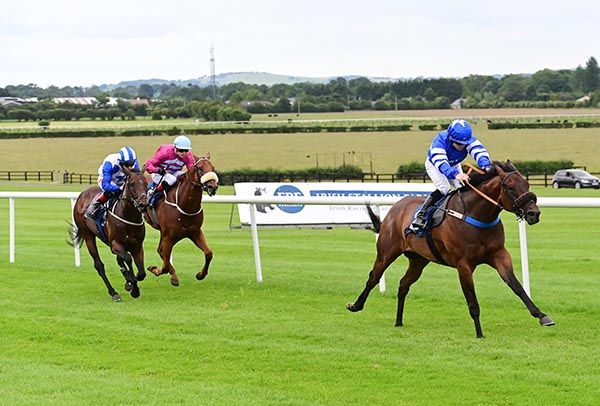 “We'll have to blame the French trainer!” joked Willie Browne from a safe distance at Naas today, as his decision to return De Velara to Ireland paid dividends, by winning the Celebrating Tinnakill House Maiden.

Withdrawn from an Arqana Breeze Up Sale in May 2021, well known consignor Browne sent De Velara to be trained in France by Giuseppe Botti, for whom he raced unsuccessfully three times.

Not to be confused with the spelling of Irish statesman Eamon de Valera, De Velara reappeared in Ireland, for trainer Browne, at Cork on June 8 and today under Wayne Lordan, quickened well to beat Plankton by four lengths.

Browne later reported “we thought a lot of him last year and sent him over to France to be trained because he had the premiums but it didn’t work out. He was placed a few times but we'll have to blame the French trainer!”

He added “I was a bit worried about the trip as he has lots of pace but he finished out well.

“The owner (John McNally) is not a seller and likes his horses so hopefully there is a dream there now. He came on well from the run in Cork and I’d imagine he’ll go for a good handicap.”

Browne, whose Mocklershill breeze up operation business began in 1978 with the initial Irish sale, also attended today's Derby Sale and added “the world is falling apart and yet horses seem to be top of the pile.