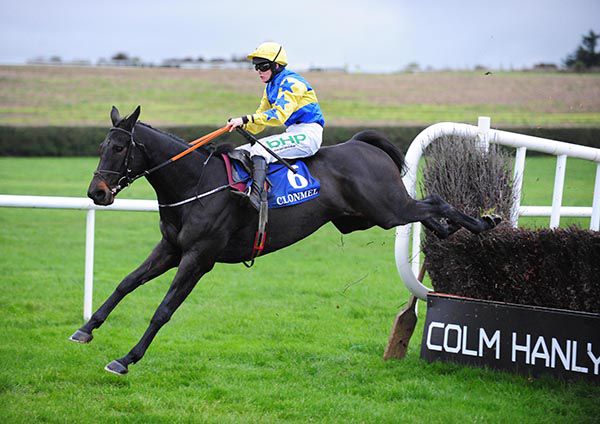 Unfortunately Indian Music pulled up injured before the fourth last but for Rachael Blackmore and her many followers there was a happy outcome to the Clonmel Handicap Chase as she doubled up at Powerstown Park on Kavanaghs Corner.

Blackmore took the previous race on Tintangle for Gordon Elliott. In the card’s penultimate contest she was aboard Kavanaghs Corner for Henry de Bromhead.

The winner crossed Steer Clear’s path two out. Steer Clear ‘missed’ that obstacle and there was quickly a telling gap between the pair.

The eventual runner-up worked hard to peg Kavanaghs Corner back on the run-in but on outing two for the Waterford yard he held on well enough by a length and a quarter.

"It was a super ride from Rachael. She did a great job on him and got him settled and then he was able to get into the race handy enough," said de Bromhead.

"He has obviously won plenty already but it is nice to add to his record. The owner felt the softer ground he would get in Ireland would suit the horse better and I'm delighted to get a winner with him."

D.J. O'Keeffe, rider of Indian Music trained by W.J. Burke, reported to the Clerk of Scales that his mount pulled up lame.

The Stewards enquired into an incident approaching the second last fence involving Steer Clear, ridden by J.S. McGarvey, placed second and Kavanaghs Corner, ridden by Rachael Blackmore, placed first, where it appeared that J. S. McGarvey ran short of room and had to check. Evidence was heard from the riders concerned. Having viewed the recording of the race and considered the evidence, the Stewards were of the opinion that any interference caused was accidental in nature and they took no further action.

T. Ryan, rider of De Bennette trained by James Grace, reported to the Clerk of Scales that his mount made several bad mistakes.