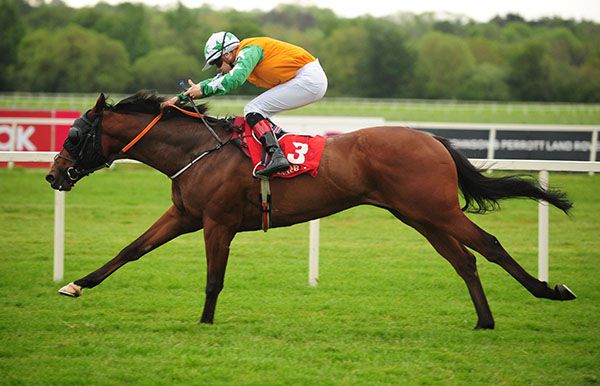 Thirteen proved lucky for Royal Admiral in the Social Package Handicap at Cork. At the thirteenth time of asking the Royal Applause gelding shed his maiden tag in the ten furlong event to provide rider Ronan Whelan with a double on the card.

Whelan won a maiden earlier for Godolphin and Michael Halford on Balefire but here he climbed aboard Royal Admiral for Shamrock Thoroughbreds and Ado McGuinness.

Whelan’s 15/1 brace was achieved as Royal Admiral defeated Sharjah and Maunganui by two and a quarter lengths and half a length.

Stephen Thorne (assistant trainer and manager of the syndicate) said: "He has been so unlucky. We had him last year and the owners decided to bring him to the sales and we thought there was a couple of pots in him so I bought him back for the Shamrock Thoroughbreds.

"Last week he was drawn very wide at Leopardstown and came out of the race really well and we said we'd take our chance today. Ado deserves the credit as he made the entry last week thinking he'd win at Leopardstown and run under a penalty tonight! We decided to declare as it looked a small field tonight and I'm delighted for the syndicate which I manage as well.

"I'm hoping he'll win again and he was bought to run over hurdles and he will go jumping over the summer. We haven't popped him over a hurdle yet as we wanted to get a Flat win out of the way and then get a clean run for summer jumping."