28/1 plus Punchestown double for de Bromhead and Blackmore 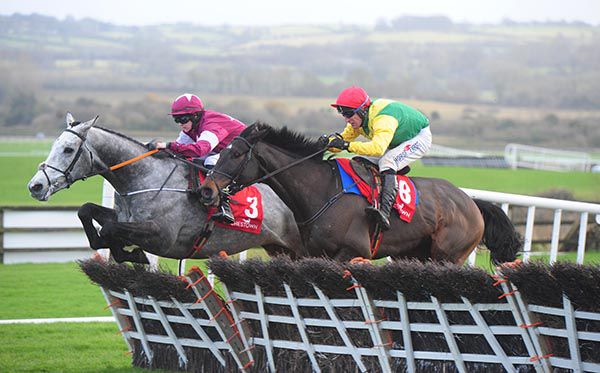 Following on from stable companion Aspire Tower in the opener, Cavalry Master led, and he was pushed along after two out.

Joined and strongly pressed before the last, the 8/1 victor was ridden to regain the lead at that flight.

Cavalry Master stayed on well inside the final furlong to beat eye-catching 40/1 shot Buddy Rich by three parts of a length.

Second favourite Sizing Pottsie was a length and a half back in third.

Market-leader Dlauro had no more to give from before the straight, weakening into 13th.

“He jumped brilliant and stayed at it really well. Rachael said that he was a bit green in front but I thought that she gave him a super ride. He’s improving all the time," said de Bromhead.

“He’s a big horse and obviously jumping fences will be his game. Hopefully he’ll keep progressing over hurdles.

“The two and a half miles novice handicap at Leopardstown (Christmas meeting) could be a possibility.”

C.J. Orr, rider of Schedar trained by Michael J. McDonagh, reported to the Clerk of Scales that his mount hung left throughout.

The Irish Horseracing Regulatory Board Veterinary Officer examined Dlauro (FR), trained by Joseph Patrick O'Brien, at the request of the Stewards and reported the animal to be blowing hard post race.

Joseph Patrick O'Brien, trainer of Dlauro (FR), reported to the Clerk of Scales that his charge burst a blood vessel.