3 for Mullins 2 for O'Keeffe on day four at Punchestown 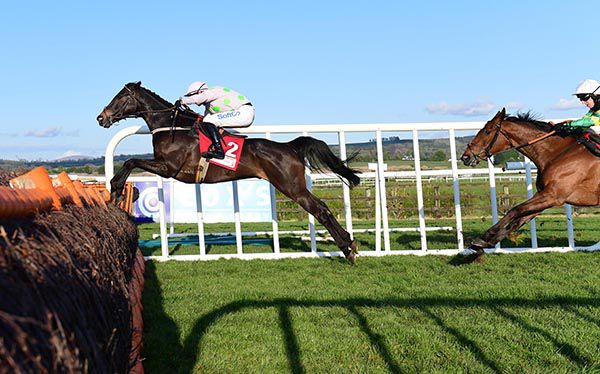 A sixteenth of the week and a treble on the day was rounded off for Willie Mullins as Sean O’Keeffe doubled up aboard El Barra in the SalesSense International Novice Hurdle at Punchestown.

O’Keeffe was earlier a winner for Jessica Harrington on Rapid Response Willie Mullins was on the mark with Gaillard Du Mesnil (Paul Townend) and Asterion Forlonge (Bryan Cooper).

With a couple of hurdles out here due to the low sun, only seven were jumped, and El Barra (12/1) disputed the lead early, and he led from the second and made the rest.

Ridden clear before the last, El Barra had a reduced advantage inside the final furlong, keeping on close home to hold off Get My Drift by a head.

“He’s done it nicely, jumped a bit left. I think he’s going to be a better horse over fences and he’ll go chasing next season,” said Mullins.

“Sean is a good pilot and he was good on Galopin Des Champs for us at Cheltenham.”

Owing to the low lying elevation of the sun, the Stewards granted permission for hurdles # 2 & 3 to be omitted from this race

Patrick Mullins gets another opportunity to finally break his duck in the prestigious Connacht Hotel Handicap on the opening day of the Galway Festival.

Ghiani riding on crest of a wave

Life in 2021 just keeps getting better and better for Marco Ghiani.

Deauville next for Primo Bacio

Primo Bacio will attempt to break her Group One duck in the Prix Rothschild at Deauville on August 3.