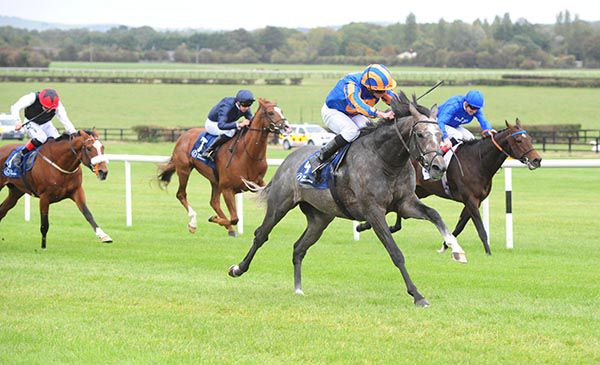 His fantastic treble at Newmarket yesterday came in at odds of over 100/1 and the good times are continuing for Aidan O'Brien and his team and supporters at Naas today — the first three races going their way.

Back from Belmont after his third place finish on Mendelssohn in the Grade One Jockey Club Gold Cup Stakes, Ryan Moore has shared in the Naas hat-trick with O'Brien. The three have come in at combined odds of over 46/1.

Following on from successes with Magna Grecia and Hermosa earlier, Cypress Creek (6/1) was the best of three Ballydoyle runners in the Group Three Loughbrown Stakes.

Renneti put the brakes on soon after leaving the stalls and took no part in this two miler, leaving seven of them to battle it out.

From over two furlongs out there were only four with a chance, and up the centre of the track in the final furlong Cypress Creek proved strongest.

The grey asserted in the closing stages to account for Twilight Payment and the staying on Falcon Eight by two and three parts of a length and a neck.

"We weren't sure what was going to happen but when Seamus jumped to make the running and then Kevin joined him there was always going to be lots of pace and it was a proper run two-mile race.

"He's a horse that stays very well. He stays forever and will get much further than two miles.

"He's Kew Gardens' work companion and that will determine a lot of his time.

"Ana rides him every day and I don't have much to do with him. Ana is more or less training him."

The Stewards advised a representative of W.P. Mullins, trainer of Renneti (FR), that a repeat of this horse's performance today, where the horse refused to race shortly after leaving stalls, would render him liable to suspension in future.

C.T. Keane, rider of Renneti (FR), trained by W.P. Mullins, reported to the Stewards' Secretaries that his mount was reluctant to race.

D. O'Brien, rider of Victory Salute trained by A.P.O'Brien, reported to the Clerk of Scales that his mount hung badly.