3 from 3 for rampant Elliott & Kennedy at Thurles 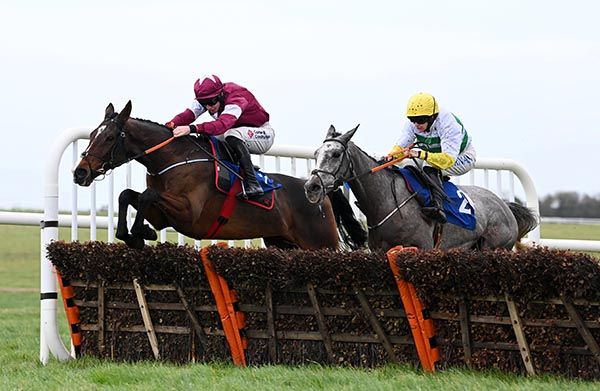 Favori De Champdou completed a quickfire 33/1 plus treble for Gordon Elliott and Jack Kennedy in the opening three races at Thurles when taking the INH Stallion Owners EBF Novice Hurdle.

The 11/10 favourite was gaining his third win at the track having also won a bumper here and overcame a year’s absence when adding a maiden hurdle earlier this month.

The son of Saddler Maker was again prominent throughout under Kennedy, who is now 24 clear in the jump jockeys table with 61 winners this season.

The Gigginstown-owned seven-year-old and Harry Des Ongrais had the race between them from the penultimate flight and Favori De Champdou was ridden clear on the run-in to score by three and a quarter lengths.

The pair stretched 22 lengths clear of the winner’s stablemate Jack In The Box in third.

Elliott and Kennedy were earlier on the mark with The Goffer (11/2) and Arctic Ambition (6/4fav).

The Cullentra House team is certainly in full cry at present having sent out nine winners last weekend alone and an amazing 34 now in the past three weeks.

Elliott said, "He is going the right way and I thought it was a good performance. He had a leg injury but is very tough and that is what he was bought to do, so it is great.

"I have a few ideas in my head and he could run in a handicap hurdle at Navan. He stays very well, you'd like the way he does it and while he doesn't show much at home, he keeps improving."