A look ahead to next week's Guinness Kerry National 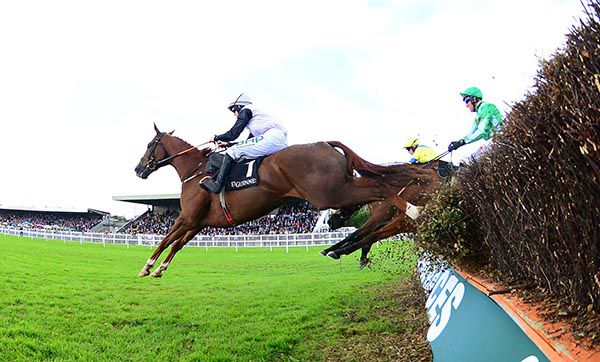 Connections of the likeable Peregrine Run will be keeping their eyes on the skies ahead of the Guinness Kerry National at Listowel on Wednesday.

The 10-year-old could yet bid for an 18th career success in the annual highlight at the week-long Harvest festival, but trainer Peter Fahey maintains that his participation depends on the ground.

Fahey said, “It is looking like a favourable weather forecast and he’ll run if the ground is good. It just went too soft for him at Galway.

“He’s fresh and well, really he’s in brilliant form and if the rain stays away, he’ll take his chance.”

Peregrine Run is the second highest-rated of the 35 remaining entries for the Guinness Kerry National after today’s forfeit stage and comes in just below early top-weight, The Storyteller. His trainer Gordon Elliott has entered four in all, with Ravenhill, runner-up in the race 12 months ago a winner at this year’s Cheltenham Festival, Three Musketeers and Timiyan also engaged. Elliott is chasing a third win after the successes of Wrath Of Titans and Potters Point, both ridden by Lisa O'Neill, in 2016 and 2017 respectively.

Poker Party won the Guinness Kerry National for Henry De Bromhead and Rachael Blackmore a year ago and De Bromhead also has four in the race, the quartet headed by Spyglass Hill and the Cheltenham Festival fourth, Plan Of Attack.

The Neil Mulholland-trained Shantou Village, in with every chance when exiting at the final fence a year ago, is set to run in the race for the third time. Mulholland said this afternoon, “The plan is to run both Soupy Soups who won the Perth Gold Cup for us at the end of last month and Shantou Village who picked up for prizemoney when fifth in the race in 2018 and was unlucky last year with what happened at the last fence.”

“It is a great race with great prizemoney and hopefully everything works out. The drier it stays the better it will be for both our horses.”

Willie Mullins has whittled his team down to three as he bids for a third Kerry National victory. Euro Leader and Bothar Na gave Mullins back-to-back wins in 2005 and 2006 and the Galway Plate third Cabaret Queen, Robin Des Foret and Blazer make up the champion trainer’s team this time.

Snow Falcon, successful in the 2018 renewal, and Cap York stand their ground for Noel Meade while Joseph O'Brien has also made two entries, Mortal and High Sparrow.

The Charles Byrnes-trained Doctor Duffy is likely to bid for a hat-trick of wins after recent victories at Kilbeggan and Ballinrobe while the Dermot McLoughlin-trained Freewheelin Dylan and the Eric McNamara-trained Internal Transfer, fourth in the race a year ago, are other notable entries.

Pat Healy, Chairman of Listowel Race Company, said: “We are delighted that owners will be back on Irish racecourses from Monday, the second day of this year’s festival. Listowel has a wonderful tradition of welcome and having owners back will certainly add to the week.

“We have some fantastic racing to look forward to and Wednesday’s Guinness Kerry National is the one that everyone wants to win. Its history speaks for itself and runners in the race have gone on to win the Cheltenham Gold Cup and the Aintree Grand National in the past. This year’s entry is once again of the highest quality and we are all looking forward to a fantastic renewal.”