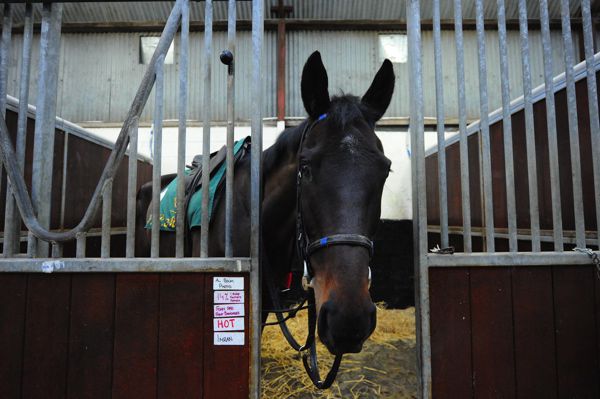 Mullins has followed the same preparation which worked so well for Al Boum Photo last season — with just one racecourse appearance at Tramore on New Year’s Day, before his biggest date of the season at the Festival on Friday.

Al Boum Photo won comfortably over two miles five and a half furlongs at Tramore, as he had a year previously, and confidence is high that he is capable of joining a list of elite horses to have won the Gold Cup more than once.

Mullins said: “We’ve decided to go with the plan that worked last season, albeit it wasn’t a plan that we came up with ourselves (last year) — the weather dictated that he went to Tramore and didn’t run again before the Gold Cup.

“I’m a creature of habit, and we decided we’d take the same route.

“I don’t know if he’s a better horse than last season. I haven’t pressed that many buttons on him, and he’s not a horse who advertises himself at home, but with age and experience he should improve — and if he does, he must have a big chance.”

After Cheltenham last season, Al Boum Photo went to Punchestown but was no match there for stablemate Kemboy, who had also won at Aintree, having departed early in the Gold Cup.

“Kemboy has had a similar preparation to last season, running in Leopardstown,” said Mullins.

“He had a real good run the last day and a very tough race — so that should leave him really, really fit.

“My only worry about Kemboy is will he remember that bit of a shemozzle he got into at the first fence last year, which knocked him over? If he gets over the first and second fence and gets into a rhythm, he will have every chance.

“He has the rating — and I think good ground would be huge for him, if it continues to dry.”

Nicky Henderson has never hidden the regard in which he holds Santini — whose whole career has been built around this date with destiny. He warmed up by beating Bristol De Mai in the Cotswold Chase.

Henderson said: “I think it was a good race (Cotswold Chase). I know that Nige (Twiston-Daves), and Daryl (Jacob), thought that Bristol De Mai was really as good as he can be.

“You would probably say the ground was more Bristol De Mai’s ground than Santini’s ground — but he still did it well. There will be a lot of improvement in that, and he is fresh and well.

Gordon Elliott felt Delta Work had excuses when third in the RSA 12 months ago — and he has gone on to win the two biggest chases in Ireland this season.

“He’s not a massive, robust horse, but he’s a fair one and he stays and jumps very well,” said Elliott.

“He’s a totally different horse to Don Cossack (the stable’s 2016 winner), but he’s probably going into the race with a better preparation than what Don Cossack did.

“He’ll only ever win by as far as he has to. I know he won by a long way in Punchestown last season, but that race fell apart.”

Clan Des Obeaux could finish only fifth last year, but as a now dual King George VI Chase winner, he arrives as another major contender for Paul Nicholls.

“Clan Des Obeaux is in great form, and I couldn’t be happier with him,” said the champion trainer.

“He did a nice piece of work at Wincanton last week and has had a great preparation.

“He is a horse who goes well fresh, and it has worked out nicely giving him a break since the King George.

“Sam Twiston-Davies couldn’t pull him up after the line and said he would have won had it been three or three and a quarter miles, so we go in there hopeful about the trip.

“We will be more patient on him this year and hopefully he will run very well.

“He has won two King Georges and is still improving. He looks really well, and we are relishing the challenge of the Gold Cup.”

Henry de Bromhead and Rachael Blackmore have enjoyed a good week already, and are represented by Monalee.

“We said after Christmas we’d go for the Gold Cup and see what happens,” said De Bromhead.

“I’m glad we didn’t aim at the Irish Gold Cup, because the ground was probably better than we would have ideally wanted.

“I always thought he was a three-miler, but everyone said he wanted two and a half. I think everyone is entitled to ask the question about the trip, but we’ll see.”

Assistant trainer Joe Tizzard hopes Lostintranslation can bounce back to the form which saw him win the Betfair Chase earlier in the campaign.

He said: “He has had his wind tweaked, and perhaps he had a harder race at Haydock than we first thought from his home work. He seems in good form now, and we hope the ground dries out so it is good to soft for him.

“I think it is a wide open Gold Cup, and he is slightly going under the radar, but I think he is a very good horse on his day. He has got to produce his best ever, and there is nothing from stopping him doing that.

“There was nothing obvious that came out of Kempton (pulled up in the King George) but he seems in good form now. If he was coming here straight off the back of his Haydock run you would really like him going into it.”

Tizzard said: “He is in good form — Jonjo has schooled him, and John Romans (owner) is keen to run him.

“He was sixth in the race last year. If he finishes in the first six again we would be delighted.

“It’s a big day for Jonjo, but he deserves it because he has been riding well for us throughout the season, and I think we have showed our faith in him over the last month.”