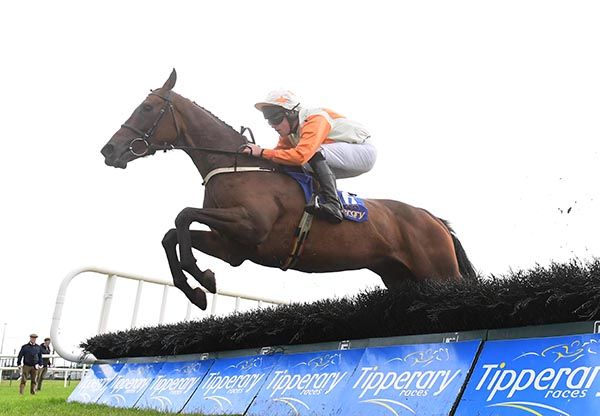 Alfieri stepping up to three miles for the first time, bolted up in the Follow @tipperaryraces.ie Handicap Hurdle in the hands of amateur James Reilly.

Second in a 2m maiden at Kilbeggan on his previous start, the five-year old by Ask was patiently ridden before cruising into contention on the approach to the straight. He sauntered clear from two out to beat Rose Mahler by a facile 13 lengths. A Dublin Job and Rost Story completed the frame.

"It is great the horse has won and I can't believe how well he won," said winning trainer Ross O'Sullivan.

"We were delighted he finished second in a very ordinary race the last day in Kilbeggan but he stepped up massively in trip.

"That was obviously a big improvement and he is entered at Roscommon on Monday (over 3m1f) so we might keep the ball rolling. James works for me and that's his third winner.

"John Place and his wife Pauline are from Rathcoole and are local to us. John bred the horse and has been persevering for years through ups and downs. John is a builder and actually built the entrance to the racecourse."