Alfred makes all for father and son team 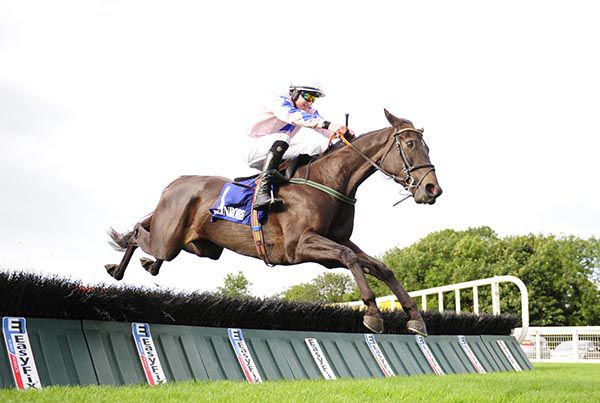 Alfred Wegener made all to land the Yupana Inc California Handicap Hurdle, scoring under Conor McNamara for his father Eric.

Successful at Limerick last summer, the son of Alfred Nobel had been ultimately disappointing since and was well-beaten on his most recent start at Killarney.

Sent straight to the front this evening, the five-year-old gelding had all his rivals in trouble as they raced towards the last, keeping up the gallop when ridden on the on the run-in, going on to score by three and a quarter lengths.

Youngnedofthehill (10/3fav) finished second under Robbie Power for Shane Nolan, while Derby De Thaix (5s to 7/2) was two and a quarter lengths back in third.

"He's been very keen and after studying the race we thought there was a huge chance of no front runner," said the winning trainer.

"We decided to jump out and he settled straight away and got a freebie.

"In fairness he gave him a lovely canny ride.

"Listowel would be a possibility but there are options for him before then."

* The Stewards enquired into an incident on the run to the last hurdle involving Derby De Thaix (FR), ridden by K.J. Brouder, Youngnedofthehill, ridden by R.M. Power, and Crafty Codger, ridden by R.P. Treacy, where it appeared Derby De Thaix (FR) and Crafty Codger received bumps from Youngnedofthehill running between them. Evidence was heard from the riders concerned. Having viewed the recording of the race and considered the evidence, the Stewards were satisfied that interference took place but didn't apportion blame to any rider so took no further action.

* The Irish Horseracing Regulatory Board Veterinary Officer examined Mosstown Miller, trained by P.J.Hassett, at the request of the Stewards and reported the animal to be post race normal.

* The Stewards requested a report from E. McNamara, trainer as to the apparent improvement in form of Alfred Wegener, placed first, as compared with its recent form. The trainer reported that this horse had been generally disappointing since winning at Limerick. Today they decided to change tactics and ride him more prominently and he seemed to get the run of the race by getting a free run up front. Having considered the report the Stewards noted the explanation offered.