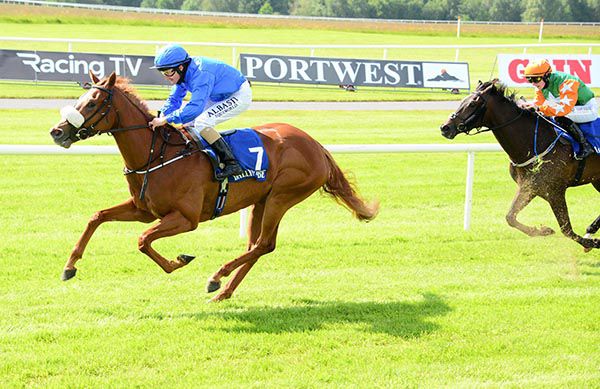 Alice Kitty took advantage of a drop in class and good ground to open her account in the John Madden & Sons Claiming Race at Ballinrobe.

The daughter of Bobby’s Kitten was placed on a couple of occasions including when second to Powerful Aggie on her reappearance at Sligo last month.

The Jessica Harrington-trained filly was rousted along by Shane Foley to challenge the front-running Whyzzat off the home turn and only got to the front well inside the final furlong.

The 8/11 favourite asserted in the closing stages and had two lengths to spare over Whyzzat at the line with Rare Flower the same distance further back in third.

Foley said, "“The ground and everything was ideal. They went a good gallop and she stayed going.

“She hated the soft ground last time but she’s a good genuine filly and there will be plenty of claims in for her.

“Best of luck to whoever gets her and they should have plenty of enjoyment out of her.”

The winner was claimed for €5,000 by Aidan O'Ryan to be trained in Yorkshire by Phillip Makin, while Macadam's Rock (fifth) was snapped up for €10,000 by Martin Ferris to be trained by Hilary McLoughlin.