All-star cast of Champions ready to do Smullen proud 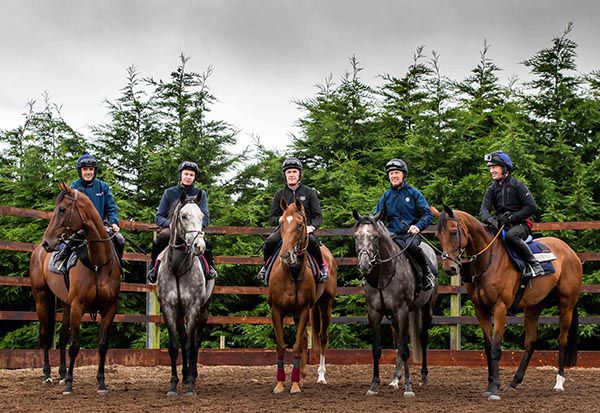 Pat Smullen’s popularity has helped create the most star-studded of legends races at the Curragh.

Dermot Weld’s former stable jockey was forced into retirement after being diagnosed with pancreatic cancer — and as he is undergoing a second round of treatment, he is unable to ride in it himself.

With the likes of Sir Anthony McCoy, Ruby Walsh, Kieren Fallon and Joseph O’Brien taking part in The Pat Smullen Champions Race For Cancer Trials Ireland, the contest certainly does not look out of place on Irish Champions Weekend.

“I’m so grateful to these lads for coming out of retirement to ride in the race — it looks like the race of a lifetime, and I’m just disappointed that I can’t ride in it!” said Smullen.

“I know that it has meant a few gruelling weeks for some of them as they get fit for it, and I really do appreciate it.

“This race will hopefully raise awareness of pancreatic cancer — but it is also going to contribute to our goal this weekend of raising as much money as possible for Cancer Trials Ireland, who have two vital cancer trials ready to go.

“I’m delighted with the quality of the race, both in terms of the incredible champions who will ride in it, as well as a competitive field of horses that will give us great excitement on Sunday. It’s a proper race too, with all horses running off their correct marks — which is what the jockeys wanted.”

For McCoy, who vowed he would never ride in a race again after winning a similar event at Doncaster, it is a welcome return to the Curragh — having started his career in Ireland.

He said: “It’s a brilliant line-up. It’s pretty much the best of the best — it’ll be hard to win, because they wouldn’t have ridden as many winners as they have if they didn’t all want to win.

“First and foremost, it’s about raising awareness and trying to raise as many funds as we can for Pat and Cancer Trials Ireland.

“Then most importantly for me, it’s about me winning it!

“I rode a horse called Nordic Wind, one of Jim (Bolger’s), and Willie Supple beat me on another one called Heavy Beat — so I haven’t forgotten it.

“The riders spread across a few decades, and Joseph O’Brien will definitely never have ridden against Charlie Swan, so there is a great spread of time as well as how long some of those lads dominated racing for.”

Walsh, who rides Aussie Valentine, only retired in the spring so has not had to work as hard as most on his fitness.

“It’s a pity for us that Pat isn’t riding with us,” he said.

“I think each and every one of us would have loved that, and that’s really what got us interested, but I think with the way things have moved along it’s probably more important — and we’re even more eager now.

“They are the biggest names there are in racing, so hopefully they’ll attract the crowd, but more importantly they will raise the money that Pat Smullen wants to raise for this charity.

“There is a fair chance you won’t see some of us again. It took Pat Smullen to get me to where I’m going to be on Sunday.

“Who wins and who doesn’t win — the result probably won’t have as big as bearing, I hope, as what the day might have.”

Charlie Swan, famed for his association with three-time Champion Hurdle winner Istabraq, has been out of competitive action the longest.

“We’re all still fairly competitive — some of us play golf together, and everybody wants to win,” he said.

“It’s all for a good cause, so I’m just going to enjoy it, hopefully have a good ride (on Yuften) — and don’t end up on the floor!

“This race is going to be tricky, because you have nine champion jockeys in it. They are not going to go off too mad or too fast, so it’s going to be a bit trickier and more tactical.”

Paul Carberry rides Katiymann for Mick Halford and said: “I ride out everyday at home, breaking and pre-training horses and then do the show-jumpers in the evenings, so I’m never not riding out.

“I’m fit enough, and I was always naturally fit anyway, so I should be all right.

“It’s great to be riding with them, and I can’t wait.”

O’Brien rides The Game Of Life, Ted Durcan is on Kattani for Weld, Johnny Murtagh teams up with his old ally Ger Lyons with Red Striker, Richard Hughes rides Murtagh’s Finding Nero — while Fallon is on Recent Revelations.