Apple's Jade back to form at her favourite track 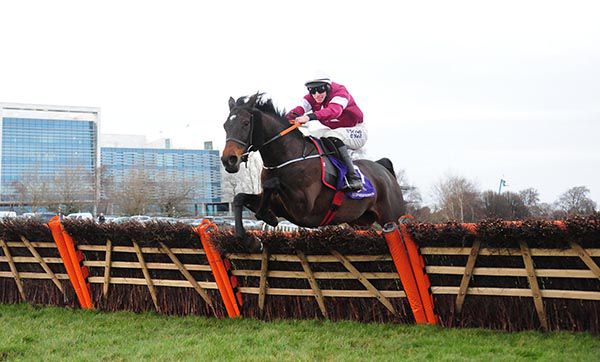 Apple's Jade brought up her 11th Grade 1 victory by running her rivals ragged in the Frank Ward Memorial Hurdle at Leopardstown.

The writing was on the wall after disappointing efforts at Navan and Fairyhouse, but she showed the competitive fire still burns deep with a sparkling front-running display to bring up plenty of bets at 6/4jf from 11/4.

A new combination of tongue-tie and cheekpieces was tried and she had recently been hunting in a bid to regain her best form.

She soon led in this three miler, and jumped right throughout, before increasing the tempo after the third last.

At this stage, Bacardys, the other 6/4 joint favourite had cried enough in rear. Afterwards, Paul Townend reported that his mount never travelled.

She travelled strongly approaching the home bend as the pursuing Killultagh Vic began to feel the pressure three lengths adrift.

She swiftly jumped the second last and had stormed clear racing to the last. The seven-year-old mare popped it well and scooted in by 17 lengths to the roar of the crowd.

Unowhatimeanharry came through for second at 8/1.

Owner Michael O'Leary said: "If she hadn't run well today she was going to be retired.

“She jumped really well today, she was jumping out to her right but she was making ground at her hurdles and seemed really keen.

“She was very lifeless at Fairyhouse and in Navan, which isn't like her. It looks like she's back which is great.

“It's great for Gordon and it was a great training performance.

“Today is a great bonus, it's wonderful to see her back, and I'd imagine she'll come back here in February.

“I can't imagine she'd go to Cheltenham. If she had one more bad run she is getting retired but if she runs like that and jumps like that we'll keep going.

Gordon Elliott added: “If she didn't win today she was being retired so she obviously knew and pulled it out of the bag again.

“I was delighted to see the horses coming up and taking her on the whole way. I asked Jack did it make a difference and he said no.

“He said just going to the start she felt different than she's felt all year.

“Keith Donoghue has brought her out hunting, we put cheekpieces on her and took the cross noseband off. I don't know what's done it to be honest.

“I'd still say her work wasn't as good as what it was but hopefully she'll get as big a kick out of that as we did and she might be back.

“I was just delighted to see her winning, it's unbelievable.

“I'll have a talk to Michael and Eddie and the whole team and see what we do now. We'll enjoy today anyway.

“As I said there was a fair chance she was going to be retired if she didn't win today and she obviously listened to us talking.

“She doesn't owe us anything and whatever she does now is a bonus.

“She's been competing at the top end since she was three years of age and it's hard to keep doing it.

“She's the horse of a lifetime and for her to do that today was just special.

“She's five from five here and I wouldn't mind having a few more like her.”

When asked if the trip made a difference he replied:- “It obviously did and it was great to get her back.

“It's great for Jack as well because he's had a lot of bad injuries and he's a serious rider. To have him back riding winners is great.

“For Michael, Anita and all the kids to be here as well is brilliant.”

She gave Elliott a double on the card as he also landed the opener with The Bosses Oscar. This was her third successive success in this race.