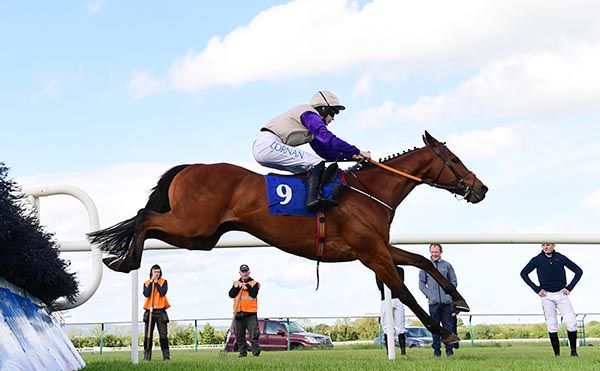 Previously trained by John Clifford, the eight-year-old ran well to finish fourth on his debut for de Bromhead in November, finishing second and third on his next two starts.

He disappointed at Gowran on his most recent outing, but was still sent off the 10/3 market leader this evening with Rachael Blackmore in the saddle.

In mid-division early on, the Arcadio bay took closer order from four out and was impeded at the next. He improved to lead on the approach to the second last and kept on well when ridden, coming home a length to the good.

Toor Moment (28/1) came from a long way back, staying on strongly to finish a never nearer second under Ian Power for Margaret Flynn, while the well-backed Delightfantastic (20s early and returned 9/2) was a further length-and-three parts back in third.

"We were always hoping he would be able to do that. He’s been knocking on the door once or twice," Blackmore said.

"It's really good for Pimlico Racing (owners) as they have a few horses in the yard."

J.C. Gainford, rider of Where's Bunny trained by N Dooly, reported to the Clerk of the Scales that his mount hung right from the third last hurdle.

Nibiru kept on strongly under Gavin Ryan to run out an easy winner of the Fairyhouse Summer BBQ Rated Race at Fairyhouse.

Grizabella came from last to first when getting up close home to land the Fairyhouse Summer Season Claiming Race at Fairyhouse.

Hardwicke Stakes runner-up Mostahdaf is out to go one better in Thursday’s Princess of Wales’s Close Brothers Stakes at Newmarket.

Coventry Stakes runner-up Persian Force has the chance to enhance the Hannon family’s fine record in the Close Brothers July Stakes when he represents the Herridge Stables team at Newmarket’s July Festival on Thursday.