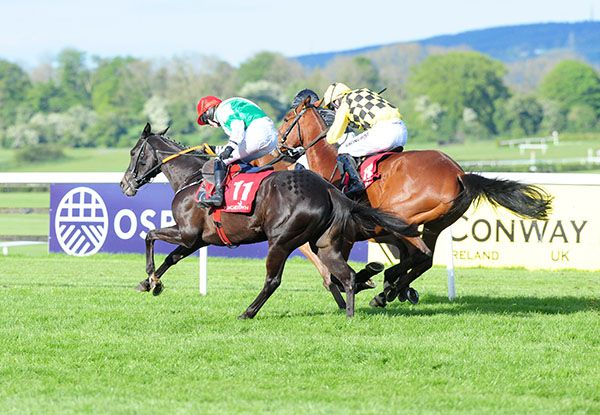 Gordon Elliott looks to have another nice prospect on his hands after Ard Abhainn stuck on well in the closing stages to land the K Club Hotel & Resort Flat Race at Punchestown.

Lisa O'Neill got a great tune out of the 13/2 shot in the closing stages to get up for a length-and-a-quarter win.

The Jeremy mare came with a strong run inside the final furlong to get the better of Tactical Move and Rocket Lad.

The winner was making it two from two having also landed a point-to-point at Linstown on her debut in March. She had subsequently cost £80,000 at the Cheltenham Festival Sale.

Elliott was recording his first winner at the festival since a double on the opening day and said:-

"It's a long time since Tuesday and I thought the charity race might be my best chance of a winner today!

“She's a nice filly and she'll come on a good bit from it.

“She's by a great sire. I'd say we'll put her away now and bring her back for that mares Listed bumper at Gowran in early October.

“She's a tough filly. She won't mind softer ground as she won a point-to-point on soft ground.

“Bernadette Murphy trained her and she came well recommended. Jamie Codd recommended her as well and Mouse O'Ryan bought her and done a great job.

“She might have been dear on the night (at the sales) but she looks cheap now.”