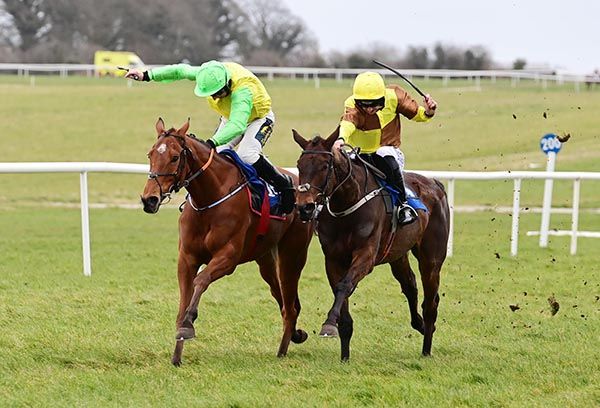 Sir Argus rallied gamely to land the bumper after a cracking final furlong duel with The Last Mardi.

The Willie Mullins-trained Sir Argus went off an 11/4 shot having been fourth on his debut at Naas in December.

Patrick Mullins made the running on his mount but they were tackled turning for home by the Gordon Elliott-trained newcomer The Last Mardi.

That rival took a narrow lead a furlong-and-a-half out but Sir Argus stuck to his task well and got back in front close home to record a half length win.

The stewards called an enquiry with the front pair bumping a few times but there was no alteration.

6/4 favourite Bellaney Lord stopped quickly before the straight and finished tailed off.

The winning rider said afterwards:- "He is still very green and changed his legs and was leaning left and right and I think there is more improvement in him.

"It was Willie's idea to make more use of him - he was keen the last day so I was wondering should we drop him in but he said to make the running and was right.

"He has a fantastic staying pedigree and will be better when he gets a trip."