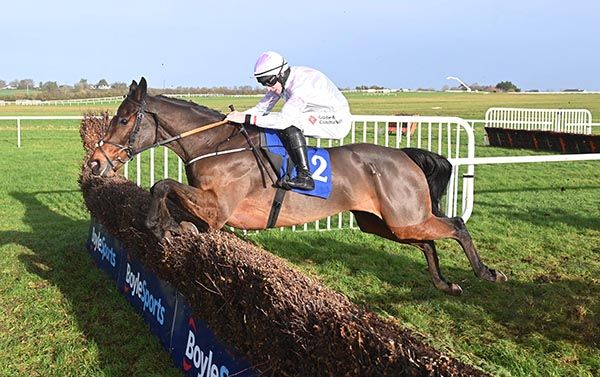 Arctic Ambition completed a quick double for the inform pairing of Gordon Elliott and Jack Kennedy at Thurles when justifying favouritism in the Racing Again Next Thursday Handicap Chase.

The seven-year-old gelding won at Tramore on New Year’s Day for Robert Tyner and was having his second start here since joining Elliott.

The 6/4 favourite was patiently ridden by Kennedy to lead approaching the final fence and ridden clear on the run-in to account for Beating The Odds by three lengths. Chameron was a further five and a half lengths away in third.

Elliott said, "He looked well handicapped, the boys (Go Go Go Partnership) picked him out and he is something to look forward to. We'll have a bit of fun under both codes (chase and hurdle) with him.

"Jack is riding great and I'm delighted for all the boys who are friends of mine and come from all over Ireland."

Elliott and Kennedy also took the opening beginners chase with The Goffer (11/2).