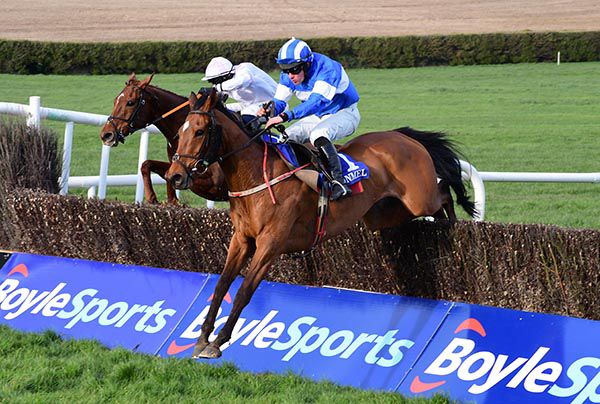 On her third outing for Terence O’Brien Ask Heather defied top-weight in the Adare Manor Opportunity Handicap Chase at Clonmel.

Under Simon Torrens, Ask Heather certainly had her share of supporters as a 15/2 chance, as the likes of market-leader Robin Deuz Pois (100/30) proved much easier to back.

It was still the favourite that gave Ask Heather most to do, but from the last the O’Brien-runner came out best by a length and a quarter.

The pair were seven lengths clear of The Trigger (7/2) in third.

The fact that Ask Heather was slowly into stride, made a slight mistake two out and jumped left at the last, was no barrier to success. This win was adding to the gains she secured previously when under Declan Queally’s tutelage.

“She did the job well enough. The ground is a lot drier than it was in Navan the last day when she ran well in a Grade B," said Torrens.

“She’s a small little mare and I was a bit afraid with top-weight. They went a good gallop early and I was flat out everywhere. In fairness she just ended up outstaying everything.

Meanwhile Gordon Elliott, trainer of Robin Deuz Pois, reacted to racing being cancelled by saying: “If it’s three or four weeks and we get back then it won’t be too bad. Everyone has to do their job and if we get back after a month it won’t be the end of the world.

“Everybody is going to have to tighten up and hopefully we’ll get through it okay.

“The racecourses have been doing a very good job but unfortunately that’s just the way that things are and we have to do the best by everyone.”

R.A. Doyle, rider of West Is Best trained by W.J.Lanigan, reported to the Clerk of the Scales that his mount hung badly left.