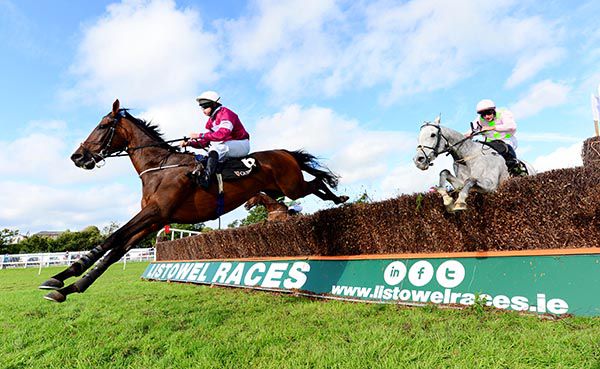 There was loads of carnage in the Guinness Kerry National Handicap Steeplechase but 9/1 chance Assemble, a faller in three of his previous five starts, put in a good round of jumping to win under rising star Shane Fitzgerald.

From the home of steeplechasing in Buttevant, County Cork, the 7lb claimer produced his mount to challenge long-time leader Annamix at the second last and led before the last where a fluent leap sent him on his way to victory.

The Getaway gelding was ridden out to beat the staying-on Brahma Bull (40/1) by two and three quarter lengths with Annamix (16/1) and Ben Dundee (20/1) filling the frame.

Winning owners Gigginstown House Stud, for whom it was a fourth win in the race, also had the 4/1 favourite Conflated and the well-fancied Farclas in the line-up but neither got around.

The winner had failed to add to his beginners’ chase win at Fairyhouse before this victory but had run well behind The Shunter at Cheltenham and was a creditable seventh in the Galway Plate on his previous outing.

Brendan Powell, assistant to winning trainer Joseph O’Brien, said: “On his form at Cheltenham this year when he was fifth in the Paddy Power (Plate) he’d a good chance. He’s always threatened he’d stay well.

“Shane seems to get a lovely tune out of him. He’s a horse that has fallen three times but he’s a great horseman and got him jumping.

“He’d a nice position the whole way. I thought turning all you’ve got to do is jump the last two and he’d win because he’d keep galloping.

“The ground probably suited him as well.

“Now that his jumping has got together hopefully he’s got a good future. He could be an Irish National horse but that’s for Joseph and Mr O’Leary to decide.”

Shane Fitzgerald added: “It’ll probably take a good while to sink it, but it’s unreal. It’s an absolutely massive thanks to Joseph O’Brien and to Gigginstown, to everyone in the yard, and all the staff that put in all the work to get to days like this that we’re all very grateful for.

“He had a couple of F's on his card, but I thought I got a great spin off him in the Galway Plate. He finished seventh and ran an absolute cracker. We thought the flatter track here would suit him.

“I was happy everywhere I went today. When I turned for home and gave him a squeeze and he picked up, I knew I was full of horse going to the second-last. I knew if something came to me, he was going to battle hard if need be.

“It’s fairytale stuff. You can’t really describe it. There’s a lot of people to thank for helping me throughout the summer. Gary Cribbin, my agent, has played a massive part too, and I’m very grateful to him.”

Paddy Power gave the winner a quote of 40/1 for the Grand National.