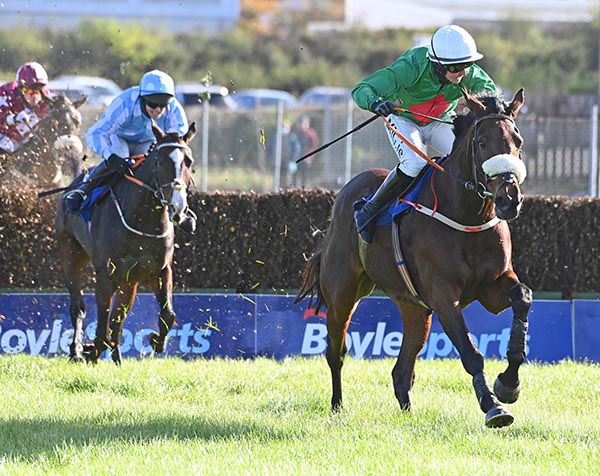 The three-time hurdle winner was easy to back all day and drifted from 11/2 to 15/2 before the off but put in an assured round of jumping under Donie McInerney.

The daughter of Doyen took the lead on the final circuit and was pursued from the second-last by the 4/6 favourite Brave Way.

The latter could find no more on the run-in, though, as Ballyshannon Rose kept on well to account for The Sliding Rock (5/2) by three lengths with Coulonces (33/1) depriving the market leader of third place close home.

"Everyone was saying she wanted heavy ground but the reason she was winning on it last year was because there was only heavy ground.

“It wasn't that she wants heavy ground but she's able to go through it. When she meets those mares on heavy ground she'll be even better.

“The plan wasn't to make as much use of her but she was fresh and free this year and she dragged him there so what could he do only go with her.

“The mares novice chase programme is a good one but some of them might be too short.

“There is the Florida Pearl in Punchestown, over two-miles-six, and then hopefully the three-mile at Christmas. We think we'll be able to step her up in grade with the way she was able to do it there today.

“She was good there, Donie popped her at the Curragh last Saturday and she jumped well for him.

"We were debating about running on the ground but we walked it and it looked safe so we said we'd take our chance.

“She's a very exciting mare and we're looking forward to going places with her.”