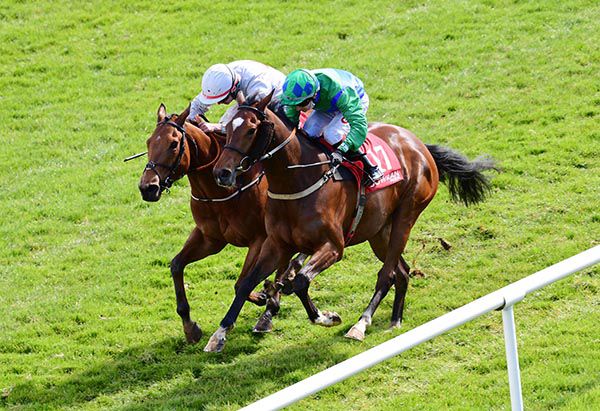 Bell Ex One, near side, pips Overheer
© Photo Healy Racing

Bell Ex One won a final-furlong battle with Overheer by a short head at the end of an extended nine furlongs in the first split of the Goresbridge Handicap.

Overheer hit the front in the final quarter of a mile as Bell Ex One wound up his challenge along the stands' side.

The 9/2 joint favourites went on with a furlong and a half to travel and it was Bell Ex One who held a narrow lead entering the final furlong.

There was contact from the leader to the runner-up as they settled down to fight out the spoils and soon after Overheer made contact with the Bell Ex One. The pair bumped again in the closing stages which led to the inevitable stewards' enquiry.

The placings remained unaltered after the enquiry with Bell Ex One confirmed the winner by a short head. Mijul Angel (25/1) was six lengths adrift of this battle in third with Nailed Down (14/1) a further half a length back in fourth for her each-way backers.

Immediately afterwards, trainer Ray Cody said: “With a bit of luck he'll keep it. He's a lazy, leery horse and Andy (Slattery) said he was on and off the bridle, he does nothing.

“I can't wait to get him over a hurdle, I think that's where his future is. He could make a smashing hurdler, he's schooled already and he loves it. He's basically not a Flat horse.

“He'll be a fun horse and off his mark hopefully he can win again.

“He loves that ground and he's very versatile as he seems to handle any ground. He's run well on quick ground as well.”

The Stewards interviewed O.J. Orr, rider of Overheer (GB), concerning his use of the whip in the latter stages of this race. Evidence was heard from the rider concerned. O.J. Orr stated that his mount hit the front a long way from the finish and he lost count while riding a tightly contested finish. Having viewed a recording of the race and considered the evidence the Stewards were of the opinion that O.J. Orr was in breach of R10(3)(g) by using his whip with excessive frequency. Having taken his previous record into consideration, the Stewards suspended O.J. Orr for one race day.