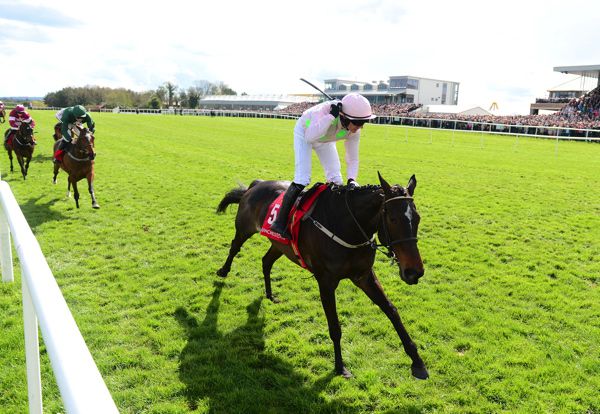 Benie Des Dieux
© Photo Healy Racing
Benie Des Dieux is reported to be none the worse for her dramatic exit at Cheltenham as she seeks to redeem herself in the Irish Stallion Farms EBF Annie Power Mares Champion Hurdle at Punchestown on Saturday.

The Willie Mullins-trained eight-year-old looked to be well on her way to taking the OLBG Mares’ Hurdle for the second successive year when she crashed out at the final flight, handing the race to Roksana.

Despite that spill, Benie Des Dieux is likely to be a warm order in her bid to win this prize for the second successive year.

“She seems great and has had no ill-effects from the fall,” said Mullins’ assistant David Casey.

“She won the race last year, she’s going back as defending champion. She’s in good form and we’re hopeful she can go and win the race again.”

She has just four rivals this time, including two stablemates in Stormy Ireland and Good Thyne Tara, who finished second and third respectively in that Cheltenham contest. They give the Mullins stable a formidable hand.

“We’ve obviously got two good back-ups as well. Both ran super in Cheltenham and if they run to the same level, you can see them being involved,” said Casey.

“Whether they are could enough to beat Benie Des Dieux, maybe not, but you wouldn’t be swapping either of them anyway. We’re delighted to have them in the race.”

Gordon Elliott relies on Tintangle, who performed with credit in the mares’ novice hurdle races at Cheltenham and Fairyhouse.

Nicky Henderson pitches With Discretion in at the deep end after victories in novice events at Towcester and Newton Abbot last spring.