Blametheshady a name to remember after taking debut win 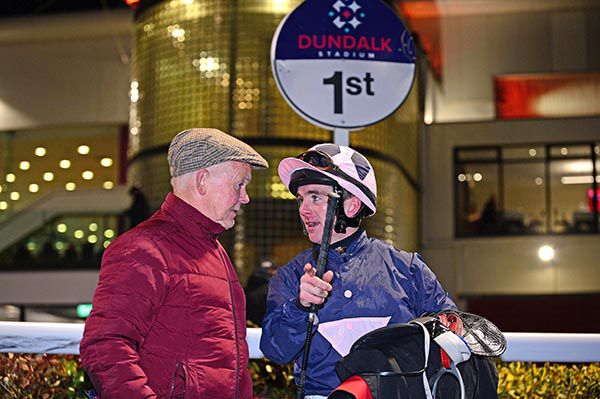 Blametheshady, a big market mover, down from around 25/1 earlier, into an eventual starting price of 7/1, delivered on debut in the BetVictor Bet 5 Get 30 Offer Maiden at Dundalk.

Trained by Gerry Keane for his wife Esther, Blametheshady, a three-year-old at this stage, went through the ring for 150,000 Euros as a foal in 2016.

Here a place looked like the best he could hope for early in the straight.

However showing a really likeable attitude from over a furlong out, the son of Kodiac stormed home under Gary Carroll to beat Magic Fountain by half a length.

Misty At Sea was a length and a quarter back in third.

“He's a nice horse. We bought him as a two-year-old,” said Keane.

“He didn't look much early on but he kept improving and turned into a nice horse.

“I hope he gets a new home somewhere now!

“If he was third I would have been delighted the way the race worked out.

“He'll improve a lot off that, he's very lazy. I was afraid of the stalls because he was very sluggish out of them at home.

“At the moment seven is ideal, even a mile the way he finished there, and he'll probably get further later on. I wouldn't go any shorter with him.”

S.M. Crosse, rider of Cold War (USA) trained by Henry de Bromhead, reported to the Clerk of the Scales that his mount broke slowly and was awkward from the stalls.

The Irish Horseracing Regulatory Board Veterinary Officer examined Sheranda, trained by D. K. Weld, at the request of the Stewards and reported the animal to be post race normal. Samples were taken for analysis.