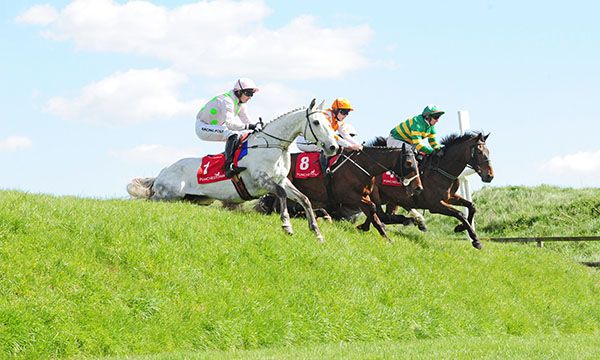 Blue Templar doubled up for the week at Punchestown when claiming the opening Dooley Insurance Group Cross Country Chase this afternoon.

Enda Bolger's charge opened his account when winning the Ladies Cup here on Tuesday and only had four days to wait for his second career success.

Ray Barron was again in the plate, aboard the JP McManus-owned gelding, and was always handy on the 11/4 shot.

The Milan gelding stuck on well in the closing stages to see off the challenge of stable-mate Josies Orders by three-parts-of-a-length.

There was four-and-a-half lengths further back to Ballinasilla.

“We had a great start and we're after having a great finish, in between just wasn't great,” said Bolger.

“It's great for Ray Barron, who is with us and he's a very hard worker. He rides a lot of the young horses and gets them going so that is his reward.

“Having a winner at the festival in these races is great and we saw Peter Maher getting his name on the La Touche the other day.

“We're all kind of smallish trainers and I'm grateful to Mr McManus to let me do this with these horses. That's what I love and the riders love riding around there.

“Blue Templar could be a nice horse for the La Touche next year.

“He loves the ground and Ray said out in front he was pricking his ears. All he can do is win.

“The owner has been patient as he was an eight-year-old maiden coming here on Tuesday. It's paid off now with two wins here this week.

“Unfortunately Josie Orders is paying for his success, with 12-7 and that's telling on him a good bit.

“He'll have a lesser penalty next year and he's also a soft ground horse. We're happy, we've had a good week with two winners.”