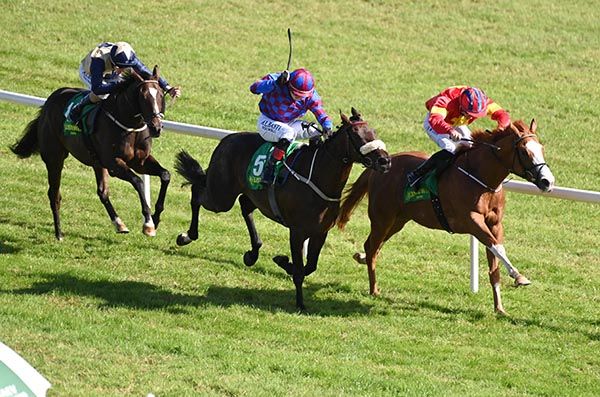 Blues Emperor stuck to his task well in the mile maiden for three-year-olds plus in Listowel.

Ben Coen had him racing in fifth on the heels of the leaders sweeping round the bend into the final quarter of a mile.

Coen soon switched him to the inner in third and his mount was ridden to take advantage of a seam with a furlong to race.

Blues Emperor (13/8) needed to no invitation to lead inside the final furlong and he saw off Boher Road (6/1) by three parts of a length. Westernesse the 6/5 favourite, had no answers back in third, beaten three lengths by the winner.

Trainer Johnny Murtagh said: "He is a horse, has done nothing only improve. He ran well on debut in Dundalk but picked up a few niggles through the year. He ran very well at Cork the last day, when I thought he might have needed the run.

"He was in a little pocket but is very genuine and tires his hardest. It is great to win another maiden, which is what it's all about, and we'll probably give him one more run this year.

"I'm delighted for the owners Helen and Mark Keaveney who are lovely people and I rode for them when I was with John Oxx. They bred him and are racing fans, so will be keen to run him again next year."