Boherbuoy upsets hot-pot in the finale 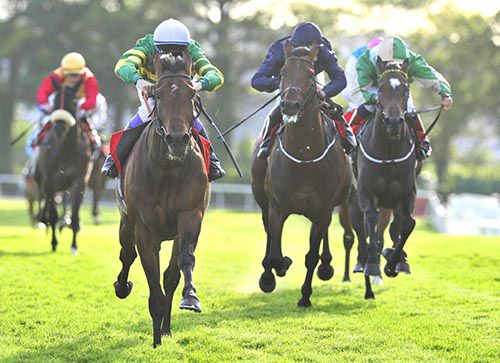 Boherbuoy was strong in the market against the odds-on New Agenda, and the confidence certainly wasn't misplaced as he took control in the straight to land the Tote Return All Profits To Irish Racing Maiden at Galway.

The son of Galileo, runner-up on his previous two outings, was available at 100/30 this morning and sent off at 9/4, although many punters still sided with the 4/7 favourite.

Fran Berry had the winner prominent throughout, and sent him on approaching the straight at which point Pat Smullen was hard at work on the hot favourite.

David Wachmanâ€™s charge stayed on well under pressure to score by two lengths, with The Crewmaster coming home strongly on debut to take the runner-up spot.

Dream Craft was a further length and three quarters back in third, while New Agenda could only manage fourth.

Winning owner J P McManus' racing manager Frank Berry said, "He learned from his two runs. He got a nice lead for the first bit and came out of the dip well. He won nicely and handled the ground nicely. We're delighted with him.

â€œHe ran a blinder in Killarney where he was just done and fought back at the finish. He'll have no problem going a bit further and I'd say he'll handle softer ground as well.â€

Fran Berry said, â€œGreenness probably beat him the last day in Killarney. He hit the front and pricked his ears there and didnâ€™t know what to do. Today we were very keen to make use of him as heâ€™s from a staying family, and this would be his minimum trip but it was great to get a lead until going down the hill.

â€œHe quickened up very well and was still quite green, and looking around at what was going on.â€