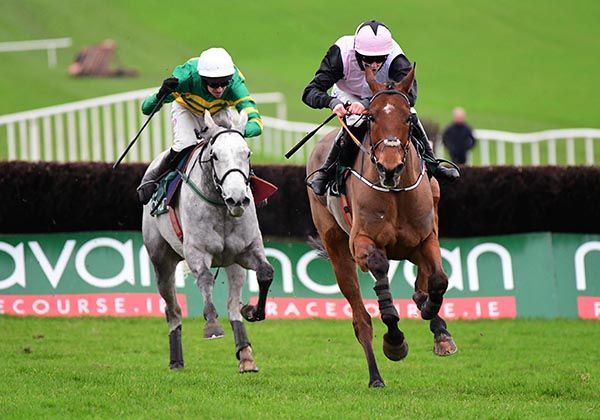 With wins cross-channel for Jonbon and Phoenix Way it’s been a decent Saturday afternoon for J P McManus, and Champagne Platinum (Mark Walsh up) added to the ‘green and gold’ gains in the Wilkinstown Beginners Chase at Navan.

There was lots going on through this three miler, but favourite backers would have been on good terms with themselves when Ain’t That A Shame (5/4) led travelling well before three out.

However he was no help to his rider, Rachael Blackmore, edging away to his left on the run-in, and on outing number three for Enda Bolger Champagne Platinum ‘nailed’ the market-leader on the line to win by a neck.

The grey, a former Nicky Henderson inmate, and winner of a point-to-point on his debut back in 2018 for Roisin Hickey, was pulled up in the Paddy Power Chase on his previous start to this. His career could be a varied one from here on.

Bolger said afterwards:- “The champagne is on me! He's a talented horse, it's just that he lost his way a bit.

“We are probably going to go to Punchestown for the cross-country and we'll see then after that what way we go.

“He was very cautious with his jumping but one thing about him is he has an engine and he stayed on. I was wondering whether we were up or not.

“On paper it looked a nice enough beginners and I'm chuffed with him.

“It's a nice surprise to get, at the start of the year and get it going.”

The Irish Horseracing Regulatory Board Veterinary Officer examined The Bosses Oscar, trained by Gordon Elliott, at the request of the Stewards and reported the animal to be post race normal.

J.W. Kennedy, rider of The Bosses Oscar trained by Gordon Elliott, reported to the Clerk of the Scales that his mount never jumped or travelled during this race.

The Stewards requested a report from E. Bolger, trainer, as to the apparent improvement in form of Champagne Platinum, placed first, as compared with its recent run in the Paddy Power Handicap Steeplechase at Leopardstown on the 27th December 2021. E. Bolger reported that his charge wore blinkers at Leopardstown and lost his position when two horses fell in front of him at the first fence and was unable to regain the lost ground to get back into contention. He added that the softer ground conditions today and the omission of blinkers may also have contributed to the improved performance. Having considered the evidence the Stewards noted the content of the report.