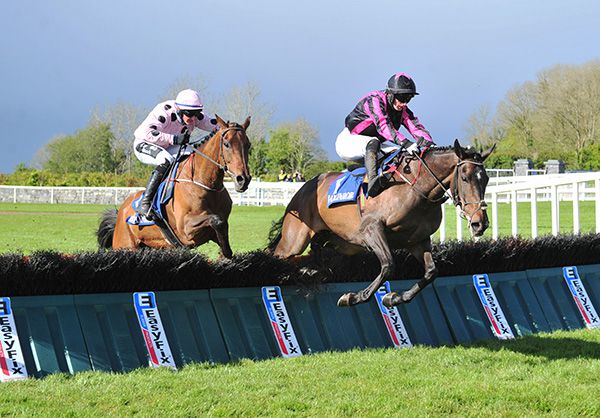 Brooks Falls got the better of a persistent Eat The Book in the closing stages of the extended two mile five furlong maiden hurdle at Ballinrobe.

Eat The Book took over at the third last and Brook Falls began to make inroads on him at the next. The latter's sustained progress saw her pick off Eat The Book at the final flight, however, Eat The Book rallied on the run-in.

Brooks Falls held a very narrow advantage which she increased in the closing stages to pull out a victory by three parts of a length at 14/1 with Tommy Brett in the saddle.

Eat The Book had to settle for the runner-up berth at 6/1. There was a 10-length gap back to third-placed Simply Shabra (50/1).

This gave trainer John Ryan a 509/1 double as he also saddled newcomer Ferdia to win the opening maiden hurdle at 33/1.

Ryan said: “She’s a good mare that got a leg after winning her bumper at Listowel.

“Jim Magill, a wonderful man, bought her then. He’s been very patient and he’s a great owner.

“That’s my first winner for Jim and he’s from County Down and runs Mount Mills.

“We use their products a lot and find them excellent for the horses.”

Champagne Sparkles, the 1/3 favourite, was beaten a long way from home and pulled up before the last.

The Irish Horseracing Regulatory Board Veterinary Officer examined Champagne Sparkles (FR), trained by Mrs Denise Foster, at the request of the Stewards and reported the animal to be blowing hard post race. Samples were taken for further analysis.

J.C. Gainford, rider of Champagne Sparkles (FR) trained by Mrs Denise Foster, reported to the Clerk of Scales that his mount hated the ground and was never going.

Horse Racing Ireland has announced three National Hunt fixtures for May which are listed below:

Social Distance, one of the most commonly-used phrases of the last year, took the honours in the Castlerea Handicap at Roscommon.