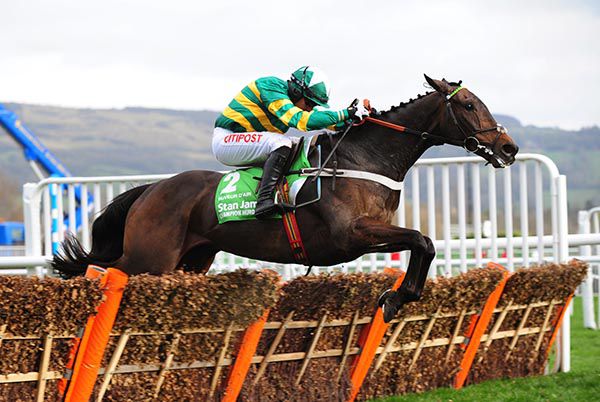 Nicky Henderson became the most successful trainer in the history of the Stan James Champion Hurdle after Buveur D'Air claimed the feature race on day one of the Cheltenham Festival.

The Seven Barrows handler has now secured six victories in the two-mile showpiece.

Just for good measure, Henderson also saddled runner-up My Tent Or Yours, who was finishing second in the race for a third time.

Jockey Noel Fehily said of the 5-1 winner: "Early on I felt I was doing too much and I thought it took me a while to get him switched off.

"He's just a very good horse. It's just fantastic. It was a great performance."

The first two horses home are owned by JP McManus, with four and a half lengths the winning distance. Petit Mouchoir was third after cutting out much of the running.

Buveur D'Air was sleek and assured in his jumping as Fehily and his companion glided into the lead before the last flight.

My Tent Or Yours deserves fulsome praise at the grand old age of 10, but Aidan Coleman's partner never looked a genuine threat to the winner.

Buveur D'Air is now unbeaten in four starts this season, but he began the campaign over fences.

However, Henderson and McManus made the decision to revert to hurdling, with his facile victory at Sandown in February a sign of things to come.

Petit Mouchoir was another three lengths away from the winner.

Henderson said of Buveur D'Air, who was third in the Supreme Novices' Hurdle 12 months ago: "He won his two novice chases, but I just knew there was more there over hurdles.

"It was before Faugheen came out of the race that I said we'd go back (over hurdles).

"He's not very flashy at home but you had to feel that there was unfinished business. It was a very open race, but I just knew he was a very talented horse."

When asked about the significance of having broken the Champion Hurdle training record, Henderson, who struck earlier on the card with Altior in the Arkle, added: "It's the horses and the people that make it.

"Of course it's special, but we do it because we love doing it. It's just fun. When this sort of thing happens, it's even better fun. We'll keep trying."

He went on: "I thought Brain Power (ninth) was going very well too, but he didn't quite get home and then you feel sorry for My Tent Or Yours.

"It's wonderful we've won the Champion Hurdle but that's three Champion Hurdles he's been second in. What else can you say about him? He's just sensational, but the young horse has done it.

"I wondered if I'd got it wrong (reverting to hurdles) but it's proved the right thing to do and it's worked on the day."

Footpad finished fourth, much to the satisfaction of Willie Mullins, who said: "I'm very happy with Footpad and I'm delighted he got in the first four. It was a good run for a five-year-old so I am quite pleased.

"We will look at Punchestown or he could go back to France as he is pretty versatile."

Yanworth was a disappointing seventh as the 2-1 favourite, while stablemate Sceau Royal finished a creditable sixth.

"Yanworth just got outpaced, though he ran on again. I've no excuses with him.

"I couldn't have been more happier with him coming into the race, but, at the end of the day, he was not good enough. We will see how he is first and if we are happy he could go two and a half (miles) at Aintree."

Nigel Twiston-Davies now accepts The New One, who was fifth, "is not really fast enough" for a race like the Champion Hurdle.

The Naunton handler said: "Maybe I will have to grow up now. He really tries all the way to the line and he nearly got fourth.

"Towards the end of the season we might try three miles at Liverpool. There is also the two-and-a-half-mile race to think about there, so we will look at those.

"There is also Punchestown so we will see what happens. He might go novice chasing next season. The world is still his oyster."